Warrior guild tokens were obtained in various activities found in the Warriors' Guild, and their only use was entry to the 2nd floor[UK]3rd floor[US] cyclopes chamber where the monsters drop defenders. Entry required a minimum of 100 tokens. From the moment you opened the doors, 10 tokens crumble away every minute. When you ran out of tokens, you were asked to leave, and if you stayed, you would be teleported out in another minute.

As of 7 December 2010, tokens have become a virtual currency and don't exist as items. They have been replaced with points gained from each room in the guild, and are shown in a menu on the left-hand side of the screen while in the guild itself. Each minute now takes away 20 points, and 200 points to enter.

Soon after the update of the Warriors' Guild, a glitch was discovered whereby if a player was teleported away from the cyclops' chamber by a random event, then the player could stay in the room forever without a timer making it significantly easier to acquire a defender. Jagex fixed this half a day later.

The animation room of the Warriors' Guild is located on the ground floor[UK]1st floor[US], west of the guild entrance. This room is one of the most commonly used rooms out of the whole guild to gain tokens, since it requires the least amount of clicking, which can be a very tiring and labour-intensive activity. To play this activity you must bring a set of normal metal armour (not white, barrows etc.). This set should consist of a full helm, platelegs and platebody and can only be made of one type of metal. To begin the activity, use the armour on one of the Animation Machines. It will come alive and start attacking you. If you defeat the animated armour you can pick it up again along with tokens for defeating it.

Notes: If the player uses black armour for animation, it is impossible to lose any piece as a result of fighting the animation. The higher the armour type, the more tokens you will receive, and the less chance of it being destroyed. If you happen to log out after you defeat your set of armour, you will NOT get it back.

Tips on fighting the armours: Bringing a Halberd to fight the higher level armours is a good idea, hide behind the fence enclosing the animating machine for best results, but if the armours retreat, switch to another fast, melee weapon right away. The armours are vulnerable to crush attacks. 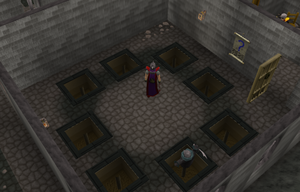 The dummy room of the Warriors' Guild is located on the ground floor[UK]1st floor[US], east of the guild entrance. There are no requirements for this activity. This room will test your abilities in attack styles by creating various dummies. To defeat these dummies you must choose the correct attack method to destroy them. Take a look at the poster inside of the dummy room for more information on what styles to use for each dummy. Each dummy correctly hit will give you 15 Attack experience and 5 tokens. 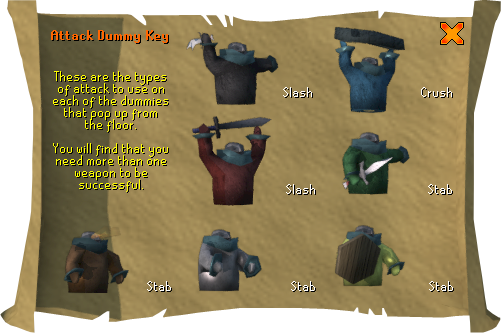 You can keep these on your screen to reference to when you feel stuck. This will negate the need to keep running back to the Information Scroll.

There are seven dummies in the dummy room, covering all four combat styles (defensive, aggressive, accurate and controlled) and all three melee attack styles (slash, crush, and stab). As a result, choosing the right weapons for this activity is important. You will need at least two weapons to be able to hit every dummy. The best strategy is to bring one weapon that can hit all but one dummy, and another weapon that will deal with the last dummy. For example, a mace can hit all dummies but "slash," for which you could carry a battleaxe. Whatever combination you choose, keep in mind that the attack bonuses for the weapon do not help in this activity. It is therefore as easy to win with a bronze longsword as it is with a Dragon longsword. It is recommended that you use only a sword, longsword or scimitar when playing this activity, as they have all of the types of attack needed except one Crush to play, but you can always use your empty hands to deal with that. If you do not have the ideal weaponry for this game, visit Anton on the 1st floor[UK]2nd floor[US].

The catapult room of the Warriors' Guild is located on the 1st floor[UK]2nd floor[US], west of the Armoury. There are no requirements for this activity. To begin this activity speak with the dwarf outside of the room to obtain a two handed defensive shield. This shield can only be equipped while standing on the target area. Once you have equipped the shield look at the ammunition being shot at you to select the appropriate defence style. It is recommended that you move the angle of the camera so that the catapult appears to be in the top-right corner of your screen, that way you can see what type of ammo is about to hit you, very easily. Each successful defence will give you 10 Defence experience and four tokens. Though this game is arguably the easiest at which to be successful, its token payoff is relatively low.

A player performing a standing throw in the shot put room's activity.

A player performing a step and throw in the shot put room's activity.

A player performing a spin and throw in the shot put room's activity.

The shot put room of the Warriors' Guild is located on the 1st floor[UK]2nd floor[US], in the north-east corner of the guild. There are no requirements for this activity. To begin pick up a cannonball and select one of the three throwing styles. If you fail you will drop the ball on your toe, losing LP in the process. To reduce this use a pestle and mortar with ashes to get ground ashes. Click on the ash to dust your hands. If you succeed the put, you will gain Strength experience and tokens. The number of tokens you receive is calculated as follows.

Each throw will reduce your amount of energy. As your energy lowers, your throw distance will be lowered, until finally, below about 10% energy, you will not be able to throw. Rest a while or use energy potions, strange fruits, or sq'irkjuice to restore your energy. Another option is to throw shotput until your energy is depleted, and then move to a different activity while restoring your energy. A good tactic if you have energy potions is to throw one ball, restore all energy lost, throw another, restore all energy etc. etc. until you have run out of potions. Then you use up all your energy. This can yield a large amount of tokens. Another tactic to use is to go in with 100 energy and throw until energy is depleted to around 50. Leave the platform and rest until it is restored. That can yield a high amount of tokens.

Another excellent option is to use the unlimited energy spa from As a First Resort then use a combat bracelet or games necklace to throw the shot put without losing any energy.

Jimmy's challenge is located on the 1st floor[UK]2nd floor[US], east of the Armoury. There are no requirements for this activity. To begin click on a keg in the room. You will balance the keg on your head and go on to select another keg, up to a maximum of five. If you lose balance the kegs will cause damage to you.

This information has been compiled as part of the update history project. Some updates may not be included - see here for how to help out!
Retrieved from ‘https://runescape.wiki/w/Warrior_guild_token?oldid=35811296’
Categories:
Hidden category: