From the RuneScape Wiki, the wiki for all things RuneScape
Jump to navigation Jump to search
Item JSON: {"edible":"no","id":"34896","stackable":"yes","removal_date":"20 July 2015","death":"alwaysinclwild","name":"Astromancer credits","bankable":"yes","gemw":false,"equipable":"yes","members":"no","disassembly":"no","restriction":"microtransaction","release_date":"1 June 2015","release_update_post":"Tuska World Event","lendable":"no","destroy":"Are you sure you want to destroy your Treasure Hunter prize? You cannot reclaim it.","stacksinbank":"yes","removal_update_post":"Adopt a Big Cat to Support WWF's Conservation Work","highalch":false,"weight":0,"lowalch":false,"tradeable":"no","examine":"Collect these credits and work towards unlocking Astromancer rewards.","noteable":"no"} 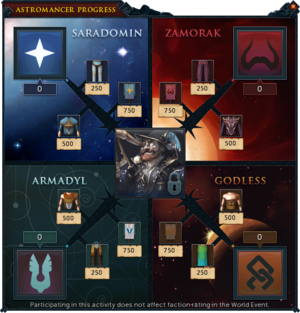 The interface for the Astromancer credits rewards

Astromancer credits are a currency used for the Astromancer outfit promo that coincided with the third world event, Tuska Comes, that could be worn in the Pocket slot. They were obtainable between 4 and 8 June 2015 from Treasure Hunter, by participating in the world event, by doing Daily Challenges, or by purchasing them from the Grand Exchange. All members received 10 credits when they first logged in.

One credit was awarded for every percentage of the spear charged when damaging Tuska during the event (up to 100 per day), as well as for each Tuska fragment collected. Additionally, handing in a completed daily challenge rewarded the player with 25 credits.

Astromancer credits expired on 20 July 2015 - attempting to interact with any remaining credits will cause them to vanish. They were discontinued from the Grand Exchange on 3 August 2015, with the price at 2,163 coins from its initial listing at 10,000 coins. 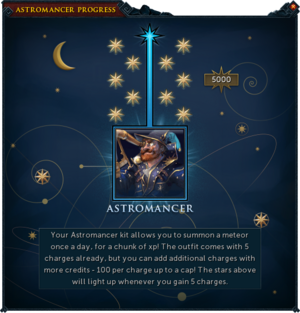 The second interface after everything unlocked

Credits were spent on faction ceremonial robes and familiars. Clicking the credits in the player inventory opened the interface. The robes are merely cosmetic and offer no combat stats. When a total of 4,000 credits were invested in the four factions, the Astromancer outfit is unlocked.

Once the outfit was unlocked, every 100 additional credits spent gave the outfit one additional charge, up to a total of 50 extra charges. Charges could be used once a day to spawn a small meteorite that grants 25% more experience in a chosen skill than normal Small XP lamp, or 75% more if the skill chosen is one of player's five lowest skills. There's also a chance it will spawn a Large meteorite instead of small one.

This information has been compiled as part of the update history project. Some updates may not be included - see here for how to help out!
Retrieved from ‘https://runescape.wiki/w/Astromancer_credits?oldid=35639598’
Categories:
Hidden categories: