A pot of flour is an item used mainly in the Cooking skill. No Cooking level is required to gather pots of flour.

Flour can be made into various types of dough by using it with a container filled with water or a water source, then used as an ingredient to make bread, pies, cakes, cheesecakes, pizzas, kebabs and biscuits.

Flour is also used to make swamp paste, by mixing it with swamp tar and then cooking it on a fire. Flour is needed in some quests, and used to infuse ravenous locust pouches with 70 Summoning.

Players may receive pots of flour from opening a box of summoning ingredients, a possible reward from the Familiarisation Distraction and Diversion.

This item can be created by using an empty pot on a pile of dropped flour.

For members, they can buy 500 from Khazard General Store and deposit it in the nearby Bank deposit box.

For free players, Mess Sergeant Ramsey's Cooking Supplies Shop is quite close to the Taverley bank, and has 500 stocked. Wydin's Food Store (also 500) is the next best option, as it is very close to the Port Sarim lodestone; you could then bank with ring of kinship or Archaeology journal.

A kitchen has a spot for a larder, and both oak larders (requires 33 Construction to build) and teak larders (requires 43 Construction) can provide unlimited pots of flour (among other ingredients) for free. Empty pots are not required, which makes this the one of the fastest methods of acquiring unlimited flour (if you want less than 500 flour the Port Khazard store/deposit box is quicker), other than buying in bulk from players, provided you use teleports or a servant in order to bank, which would allow you to keep banking flour indefinitely. The biggest downside of this method is its tediousness, as you can only take one pot of flour at a time and it takes a little while as the game processes the commands (Note: Spam clicking the larder while simultaneously hitting the 4 key greatly speeds the process). This also nullifies the advantage of the more expensive servants' carrying capacity, as they would return in less time than it takes for you to get all the pots they can carry.

It's also possible to take advantage of a kitchen sink to make dough on the spot. If you place an empty pot on your action bar, you can drop the pots quickly to make more space.

From a windmill[edit | edit source]

Flour is ground-up wheat, which can be picked from a wheat field (size irrelevant due to its fast respawn), often found near a windmill. You need empty pots to collect the flour.

The machinery for milling grain is usually found on the top floor of the windmill. The grain must be used on the hopper, then the mill controls operated. This will fill the flour bin on the ground floor with 1 unit of flour. This process must be repeated individually for each piece of wheat, as the hopper will only hold 1 piece of wheat. The flour bin can hold up to 30 units of flour. Clicking on the bin will empty some flour into one of the pots in the player's inventory. Due to this being a very slow and labour-intensive process, pots of flour are rarely manually made. 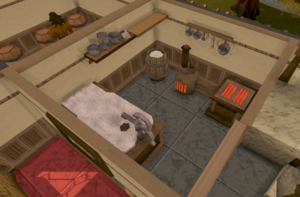 The barrel of limitless flour is tucked in the corner of the Sinclair Mansion kitchen.

From the Sinclair Mansion[edit | edit source]

After starting the quest Murder Mystery, members can access an unlimited barrel of flour in the kitchen of the Sinclair Mansion just north of Seers' Village. Simply use an empty pot with the barrel to fill it with flour. This allows you to quickly fill the pots in your inventory, with the tradeoff of having to walk at least one way of the trip to a bank. There is one fairly close by in Seers' Village to the south, or players can use the nearby Fairy ring to reach a bank in Zanaris. As this is next to a sink and a range, it is an excellent spot for turning swamp tar into swamp paste.