Murder Mystery is a quest revolving around the murder of Lord Sinclair, which needs to be solved. It is a unique quest, in that everything is random and there is a good amount of detective work you have to do on your own. However, there are plenty of clues to be found as to who the culprit is. The murderer varies on every account.

A map of the mansion

To begin, talk to one of the guards near Sinclair Mansion, located directly north of the Seers' Village. They tell you that Lord Sinclair has been murdered and they cannot figure out who killed him. Offer your help, and he says that you should question the family to gather information about the murder.

Enter the mansion and search the murder scene in the north-eastern section. Inside will be a pungent pot which you should collect, along with the criminal's dagger. Investigate the smashed window to find the criminal's thread.

Outside, you must investigate the wooden gate, noting that the dog barks at anyone unfamiliar. Then, go around to the various bedrooms belonging to the suspects to find a number of silver items, all contained within barrels in each room. Look for:

There are four rooms upstairs and two on the ground floor.

The barrel of flour used to obtain fingerprints off the evidence

Now it's time to get your first piece of evidence. Go to the gardener's shed connecting the mansion, to the north-west, and search the sacks to find some flypaper; you may need up to seven sheets, so collect them all if you have the inventory space.

Go to the kitchen next to the stairs and fill your pot with flour. Use the flour on the criminal's dagger, then use the dagger on a piece of flypaper to get an unknown print.

Dust each silver item with flour and use the flypaper to lift fingerprints off them; Use each person's print on the unknown print of the silver dagger you found at the crime scene. If you're unable to accurately find the print on the items, ensure you're using a blank piece of flypaper. Once you've got a match, you can drop all the other silver items. Go to any guard in Sinclair Mansion and tell him that you know who did it. When asked for evidence, present the fact that you found matching fingerprints (you must do this step, otherwise the poison salesman will not appear in the pub in Seers' Village).

Sherlock in the House[edit | edit source]

Go to the mansion gate and speak to the Gossip, loitering around the guards, and ask him who he thinks is responsible. ﻿He mentions seeing a poison salesman who came from the village and gave a huge sale on poison to the family. The poison salesman is in the pub in Seers' Village.

Travel southwest to the pub and ask him about the poison and he'll tell you that everyone at the mansion bought some. Go back and ask the person with the matching fingerprints what they used the poison for. Then check the corresponding item or area. Things will not be as they said.

Go back and talk to the guard and tell him you know who did it. Show him the fingerprints, tell him about the poison, and show him the thread from the window-sill, since its colour will be a match to an article of the guilty party's clothing. Case closed! 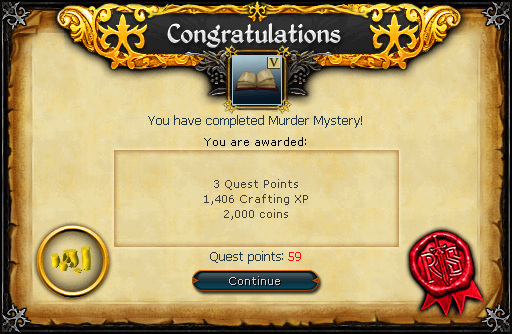 Murder Mystery is directly required for the following quests/miniquests: