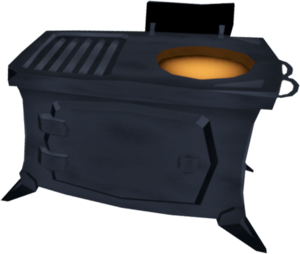 A cooking range is an object used primarily to cook food via the Cooking skill. To cook raw food, simply use it on the range. Almost any food item can be cooked on a range, though there are some exceptions that require a fire and an iron spit. Players can also burn seaweed on a range to turn it into soda ash.

All ranges have lower burn rate than fires, and the Cook-o-matic 25 range in Lumbridge Castle has an even lower burn rate for low-levelled foods once unlocked after completion of Cook's Assistant. Foods which benefit from the decreased burn rate are listed in the cook-o-matic manual. However, this does not eliminate the player's risk of burning food until the player has reached the necessary Cooking level not to burn that item, as normal.

Some food items such as potatoes and pies can only be cooked on a range but not a fire.

There are many other interactive scenery objects that may be used as range, but are not named "range." Members may build a variety of ranges, ovens and stoves in the kitchen of their house.

The sulphur pit in the TzHaar City (which is marked as a range on the minimap) along with the now-removed sulphur vents, and some fireplaces can also be used to cook food, but they function as eternal fires instead as range-only items like pies cannot be cooked on them.

Ranges are located in many other places than the areas mentioned below. They are marked on a player's minimap by the

icon. Notable ranges are listed here. Players may also subsequently use burning logs to cook their food on.

A player cooking food on the Lunar Isle range. Note that it does not appear on the minimap.