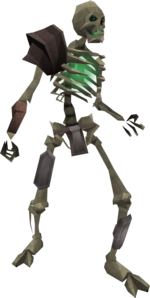 This skeleton ranger attacks by throwing skulls at players, and frequently changes targets. These skeletons don't hit as high for their level as the warrior and mage skeletons, but they have somewhat high defence, attack quickly, and are very accurate to compensate. They are weak to crush attacks. These skeletons have a tannish colour, and their attack has a distinctive sound. The highest level (126) skeleton rangers tend to hit into the low to mid-400s against players in magic armour. They will also target random players that are attacking it or other players (unless the other player uses a shadow silk hood). These skeletons should be targeted first, unless there are other high-levelled dangers (such as mysterious shades) nearby in the room.

This information has been compiled as part of the update history project. Some updates may not be included - see here for how to help out!
Retrieved from ‘https://runescape.wiki/w/Skeleton_(Sinkholes,_ranger)?oldid=35485772’
Categories:
Hidden categories: