From the RuneScape Wiki, the wiki for all things RuneScape
Jump to: navigation, search
For other uses, see Skeleton (disambiguation).
The Old School RuneScape Wiki also has an article on: osrsw:Skeleton (Ape Atoll) 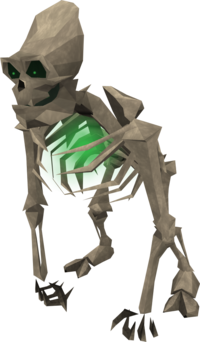 Skeletons are skeletal apes that are found in the Ape Atoll Dungeon. Due to their aggressiveness they are a common target for rangers using grey and red chinchompas and mages using burst and barrage spells to train on.

They are a form of Undead, meaning players can equip a Salve amulet (or Salve amulet (e)) to increase their damage output on them.

It is worth noting these skeletons have a special respawn ability - if their bones are not picked up and buried, they will respawn again in an effect similar to the Skeletal horror. To prevent them from overflowing the game, if too much of their bones are on the ground, they will "burn" instead, permanently killing the skeleton. Their bones cannot be taken out from the dungeon, as they will turn into ashes upon doing so.

The bones were not originally able to be crushed for Prayer experience by the Bonecrusher, but a small update made it possible to do so. However, it is still not recommended to crush the bones since the skeletons spawn from them.

The update history project is a work-in-progress – not all updates to this topic may be covered below. See here for how to help out!
Retrieved from ‘https://runescape.wiki/w/Skeleton_(Ape_Atoll)?oldid=34729307’
Categories:
Hidden categories: