From the RuneScape Wiki, the wiki for all things RuneScape
Jump to navigation Jump to search
This article is about the NPC. For other uses, see Crunchy (disambiguation).
The Old School RuneScape Wiki also has an article on: osrsw:Crunchy
Crunchy? (edit)? (edit) 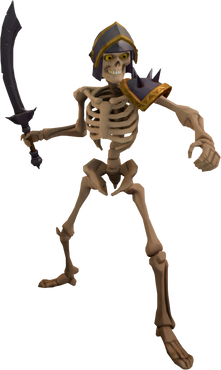 Crunchy is a skeleton that Jagex often used for promotional material on the RuneScape website between 2003 and 2006. Crunchy is depicted as a skeletal warrior with a metallic helmet, and was often accompanied by a human named Tim. His most famous role was holding the "High Detail" button before RuneScape HD's release. He also featured in various other pieces of artwork released by Jagex, the most famous of which depicted him playing dice with Tim, released as a wallpaper and on the cover of RuneScape - The Official Handbook. This artwork also depicted Tim and Crunchy with a small green dragon pet called Eski, sitting beneath the table on a leash held by Tim.

Tim and Crunchy first appeared in-game as bobbleheads in the 2016 quest Gower Quest. Correctly proportioned versions of them later went on to host the Yak to Basics Yak Track in 2021.

After a long absence, Tim and Crunchy returned to website artwork in 2018, being featured on the login screen, in a recreation of the original artwork that depicted him playing dice with Tim.

Crunchy also responded to a letter in the 1st Postbag from the Hedge, which first revealed his name, and later responded alongside Tim and Eski in the 14th issue. 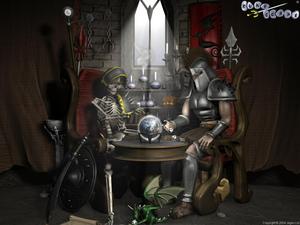 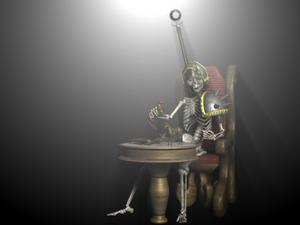 Crunchy playing with a toy horsey, as seen in the final issue of the God Letters.

Crunchy lacks the neccessary body parts for speech, and thus communicates through methods such as gestures and writing. Tim is the only one who claims to be able to understand his gestures, and speaks through him like a ventriloquists dummy to communicate what Crunchy apparently means to say. Parts of him, such as his left hand, have been known to occassionally fall off.

Crunchy first met Tim early in Tim's adventuring career, during an adventure through the Wilderness. Back then, Tim had no friends or loved ones, and he quickly became close to Crunchy, to the point they became inseperable. Since then, they've gone on adventures together for over fifteen years, which Tim describes as "fifteen years of questing, slaying monsters and training our skills", although Crunchy claims he's instead just been riding off his coattails.[1] Crunchy claims that meeting Tim was the best thing that ever happened to him, and really helped him "find his voice".

According to Crunchy in the 14th Postbag from the Hedge, he, Tim and Eski occasionally go on holidays together, and are happy to invite anyone who asks to their dice games.[2]

Crunchy appears as a bobblehead in the Gower Quest, alongside Tim. Due to being incapable of speech, Tim speaks through him like a ventriloquists dummy. According to Tim, after the Tim and Crunchy bobblehead pets lost the Player Power poll, it was decided that they would be in the quest anyway, but the wrong concept art for them was used by mistake. They are in charge of overseeing the five Environment artists, and they task players with giving them cups of tea before they help rob the Wise Old Man's bank. After the quest, Crunchy can be obtained as a pet, along with Tim, by speaking with him or Tim in Behind the Scenes.

In 2021, Crunchy hosted the Yak to Basics Yak Track in Burthorpe alongside Tim. As the hosts, they requested heroes help them with their quests in exchange for rewards so they could take a break from questing without taking a hit to their reputation[3]

Transcripts Crunchy is the author or co-author of: