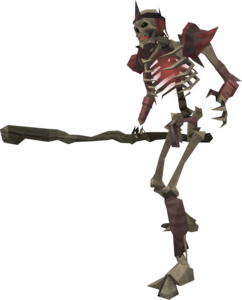 This skeleton mager attacks with a purple magic spell, and will frequently change targets just like the ranged skeletons. They have relatively high defence to melee attacks and moderate magic defence, but are weak against ranged attacks, specifically thrown weapons. Being a mage, it can attack players wearing a Shadow silk hood. However, unlike Forgotten mages, they will not disable its effects. In addition, they cannot use binding or stat reduction spells, but they do attack slightly faster to compensate. The highest levelled (198) skeleton magi can hit into the mid 500s or more. Fortunately, they have extremely low accuracy. These monsters are similar in appearance to the skeleton magi found outside of Daemonheim, but they use a purplish spell instead of the Earth Bolt and Fire Blast spells used by the magi on the surface.

This information has been compiled as part of the update history project. Some updates may not be included—see here for how to help out!
Retrieved from ‘https://runescape.wiki/w/Skeleton_(Sinkholes,_mage)?oldid=35637161’
Categories:
Hidden categories: