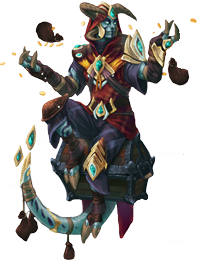 Across Gielinor, sinkholes are opening up, revealing lost treasure caches once stored by Bilrach. The Gorajo hoardstalkers within have no love for their old master, and are more than happy for you to raid his vaults. It won't be an easy job, though - you'll be pitted against the clock to unlock the treasure room in time, and you'll need to ensure you're ahead of your team-mates to get the best rewards!

Enter a sinkhole, and you'll be sent to a lobby where you'll be placed into a group of five like-minded adventurers. You'll then be placed into a large, open-plan dungeon filled with monsters and resources. Your team will have seven minutes to complete up to three objectives, which will involve gathering resources, collecting totems from monster drops, and collecting exploration totems by discovering areas of the dungeon. While completion of these is a team-wide goal, each player's contribution will be tracked separately. The better your score, the more likely you'll place first, which will give you the best shot at the richest rewards.

To contribute to the goals, you'll need to deposit the resources or totems that you've gathered into chutes near the dungeon's entrance. Once each goal is met, you can no longer contribute to it (and - as such - be further credited for your contribution). Dumping in a big batch of resources or totems might bump up your score, but it'll do you no good if other players got there first. Winning first place is a balancing act of risk and reward!

Complete one or more of the objectives as a team, and you'll gain access to the sinkhole's treasure room. The more objectives complete, the better the rewards overall. Each player will be assigned a chest containing a reward. The highest-ranked player's chest will contain a huge Dungeoneering XP lamp, but the others will each be assigned a different prize from the following list at random:

Once the chests have been assigned, each player has the opportunity to play a card, in order of last place to first place. These are picked up through activity within the dungeon, and the highest-ranked player gets an extra card to choose from. These cards - themed after summoned familiars - have a number of effects which will be played out in order of last to first. For example: the thieving locust card will swap your chest with that of the lowest ranked player; the protection titan card will block one attempt to move your chest; and the reversing phoenix card will cancel the effect of the previous player's card. You can see which cards are used by other players, so the higher you rank, the bigger your advantage. Once the round of cards is over, each player will be given their final prize.

As well as a healthy hoard of Dungeoneering XP and tokens, you can also obtain pieces of the Gorajo hoardstalker set - cosmetic versions of the gear you'll wear within the sinkhole dungeons. If you're collecting this outfit, look out for the preening ibis card, which will guarantee a piece of the set in your current chest.

Delve deeply, fight bravely and plan carefully - and may the fates favour you, naabe!

How to start Sinkholes:

Speak to Talsar in the Fremennik camp on Daemonheim Peninsula for details, as well as a free teleport to open or emerging sinkholes. New sinkholes appear on a two-hourly basis. Note that you can re-enter a sinkhole that you have recently left.

Speak to the Gorajo hoardstalker within a sinkhole for a demonstration of how the D&D works.

Take a tour of Sinkholes in our latest Behind the Scenes video: