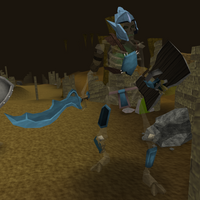 Ranalph Devere is one of the three long-dead warriors required to be killed to collect the heart piece for the Legends' Quest. There are several of these warriors around the cave and killing one causes all of them to stop being hostile, but you can still attack them and they will fight back. However, if you attack another one, you will be unable to kill him as he can only be killed once. He attacks with melee.

Ranalph Devere: "Upon my honour I will defend till the end..."

Ranalph Devere: "May your aim be true and the best of us win..."

If you try to talk to him after he is defeated: "Thee has beaten me in battle and still thee searches for source?"