From the RuneScape Wiki, the wiki for all things RuneScape
Jump to: navigation, search
The Old School RuneScape Wiki also has an article on: osrsw:Boneguard
For the boneguard in the current version of the quest, see Akthanakos.

The Boneguard was an enemy encountered during the Enakhra's Lament. It was an enchanted creature, bound to guard Enakhra's Temple against its will. It attacked the player with melee, and the Crumble Undead spell had to be cast on it to defeat it, after which it would turn into a Freed Spirit and thank the player. Players could then climb over its bones.

As the spell was removed with the Evolution of Combat, the Boneguard no longer makes an appearance, but the Pile of bones it left behind is still present.

Another Boneguard appears later in the quest, which is revealed to be Akthanakos. Like the other boneguard, he was altered with the release of the Evolution of Combat. Previously, players had to use protect from melee to block his attack before he would converse with players. 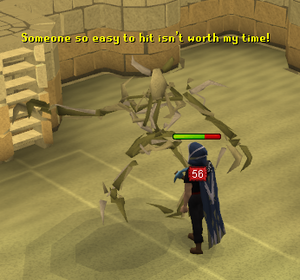 Akthankos' Boneguard form attacking a player before the Evolution of Combat.

This information has been compiled as part of the update history project. Some updates may not be included - see here for how to help out!
Retrieved from ‘https://runescape.wiki/w/Boneguard?oldid=35582372’
Categories:
Hidden categories: