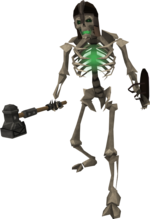 Similar to the ones found outside of Daemonheim, this skeleton melee has the highest number of variations in appearance out of the 3. As they are melee fighters, they are considerably weak against magic attacks. They often wield weapons such as Hatchets, Warhammers, Longswords, and more. On occasion, they can drop these weapons when defeated. They can deal considerable damage for their level; the highest levelled (178) skeletons can even hit over 350. The max hit of a warrior skeleton depends on what weapon (if any) it is wielding - the more powerful the weapon, the higher the skeleton's max hit. For example, skeletons wielding longswords, flails, or warhammers will generally hit harder than similarly-levelled skeletons wielding shortswords, hatchets, or no weapon at all.

This information has been compiled as part of the update history project. Some updates may not be included - see here for how to help out!
Retrieved from ‘https://runescape.wiki/w/Skeleton_(Sinkholes,_warrior)?oldid=35634937’
Categories:
Hidden categories: