An unstable portal leading to your own private training cave. It won't last long.

A map of the accessed cave 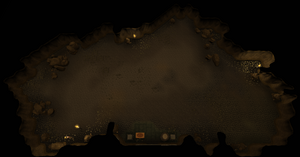 The explorer's aura was a reward for completing a single category during the 2015 RuneScape Road Trip. It could be activated for 5 minutes and would reset at 00:00 UTC. Completing additional categories unlocks the higher tier greater, master, and supreme explorer's auras, providing 10, 20, and 30 minutes of active time respectively. After the aura was first unlocked, it would last for 30 days and would be usable once per day. If a new tier of the aura was unlocked, the aura could immediately be used again.

Once activated, the aura would direct a player to a portal a short distance away leading the player to a cave full of valuable monsters or resources, depending on the player's choice when activated. It was possible for the portal to not appear in some instances; such as a player-owned house, Clan Citadel, or in centres of traffic, in which case you would have to run to the portal. Due to the limited aura time, it was best to be fully prepared for the trip before activating the aura.

Due to the ability to leave the cave and load a new one, the greatest profit/experience was gained from leaving the cave and then quickly generating a new cave until players had the resources/monsters they wanted. Consuming the resources/monsters as much as possible then reloading a new one. However, there was a cap on specific resources, after which the game would show the massage: There are no more x worth salvaging on this x. You should return tomorrow. Reloading would not reset this limit. Up to 125 herbs could be picked per day. The type of resources were generally of the highest the player can find for the associated skill, such as Adamantite and Runite for Mining, and Yew and Magic trees for Woodcutting.

When the aura's timer ended, the player would automatically be teleported out of the cave. Any items on the ground or deployed traps would be lost.

30 days after it had been claimed, it would disappear along with the message: " Your Explorer's aura has expired." 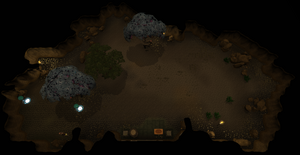 If the player choose to enter a Resources cave, they would be teleported to a private cave containing several resources, as well as a bank chest and a deposit box. When the aura expired, the player would be automatically teleported back to the surface. The player could also chose to exit through the Mysterious door. If the player choose to do this, the layout and content of the cave would change upon re-entry. This way, players had the ability to choose what resources they wanted to gather.

The possible resources that spawned in a resource cave could include three of the following types:

Resources would spawn relating to 3 random skills. All resources, except for fishing spots, would deplete after a short time, but would respawn. 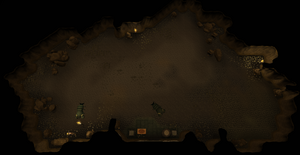 If the player choose to enter a Monsters cave, they would be teleported to a private cave containing six monsters such as jogres, moss giants, skeletons, elves, waterfiends or rock lobsters, as well as a bank chest and a deposit box. When the aura expired, the player would NOT be teleported back to the surface to allow time to loot drops. The player could still choose to exit through the Mysterious door.

The monsters would respawn when all were killed or after a certain interval, and would no longer respawn after the aura charge expired.