A player cleaning a grimy herb.

Herbs are items used to make potions with the Herblore skill. There are many herbs, each of which have a "clean" and "grimy" form. Herbs must be clean to be used in potions. Players can clean grimy herbs, provided that they have the minimum required Herblore level. The required Herblore level to clean herbs varies from one type of herb to another.

When making potions, players must combine a herb with a vial of water (or coconut milk for a few high-level potions). They must then add a secondary ingredient. Some herbs can be used to make more than one type of potion.

Before the Herbal Remedies update on the 10 September 2007, herbs were divided into "unidentified" and "identified" instead of grimy and clean. Unidentified herbs could not be used in potions, and had to be identified (equivalent to cleaning in the current system) by a player with the requisite Herblore level.

Each type of herb, identified or not, was placed in a separate stack in the bank or inventory; for example, all unidentified ranarr weeds would be in one stack, and all unidentified tarromins would be in another. They all had the same name: "Herb" and the same icon, nonetheless by identifying one of the herbs of the stack, the player would know what the herb was in the stack.

This became a scamming issue, as player selling unidentified herbs could claim that the herbs were higher level (and therefore more valuable) than they actually were. At that time, the trade window did not give any indication at all of the value of items being traded; this was not introduced until the Trade and Drop Changes update of 10 December 2007. The "unids" as they were sometimes called were often sold at 1,000 coins, and sometimes up to 5,000 coins per herb.

The buyer could only determine which herb they were buying by identifying it themselves after they had bought it or by carrying a full inventory with one slot being filled with noted unids that they knew were of a certain type (and no other unids). This way, they could only accept the type of unids they needed. To remove this scam, Jagex replaced unidentified herbs with grimy herbs, and identified herbs with clean herbs. They also changed the herb graphics, providing a number of different shades of green and blue.

Players will normally obtain herbs as grimy (except when buying clean herbs from other players). Players can clean grimy herbs by left-clicking on them, gaining a small amount of Herblore experience points, but each type of herb has a minimum Herblore level requirement that players must have to do so. Players who do not have the required Herblore level to clean a herb can take it to Zahur, the herbalist in Nardah, who will clean it for 200 coins. Alternatively, they can use the Assist System to borrow another player's Herblore level so they can clean the herb. However, if a player's Herblore level is high enough to use the herb in potions then it is high enough to clean the herb.

Players can buy and sell both clean and grimy herbs at the Grand Exchange. The graphical differences between them are fairly small. Against the inventory background, the herbs are somewhat more grey and there is a small shape change.

Grimy herbs were worth more on the Grand Exchange than clean herbs for a long while, especially lower-level herbs, although this seems to have changed. Players who are trying to grow them for money should check both grimy and clean prices if they have a high enough Herblore level to clean them.

As of an update on the 7th November 2022, herb patches can never die, they can only become diseased which simply requires curing using Plant cure. The Farmer's Catalyst fragment (or combined version) acts as an infinite source of Plant cure and provides Shadow-infused herbs which can be cleaned for Herblore XP (but provide no resources) when curing the diseased Herb patch. In addition, you can now plant multiple seeds per patch (with Plant power upgrades from Sydekix's Shop of Balance), however to maximise yield, the player should always plant only a single seed in the patch.

Prior to this update, a study was conducted showing that herb patches yield an average of 6.8 leaves (8.2 leaves, ignoring dead patches) per plot with optimum tools. The following are the results of a study planting 728 seeds (1 seed per patch) in 5 herb patches (including the disease-free patch at the Troll Stronghold) and using Supercompost and Magic Secateurs:

From this, these key points can be made: 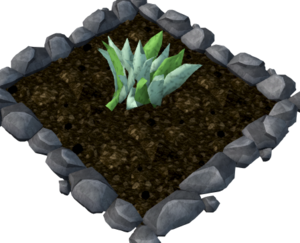 Herbs in a farming patch

Goutweed is a rare herb that plays a role in the Dream Mentor and Eadgar's Ruse quests. Sanfew will exchange them for other random herbs at a 1:1 ratio. It requires 29 Farming to plant in a herb patch.

Some herbs can only be cleaned after a player starts the Jungle Potion quest. They are not tradeable.

These herbs are only found in Daemonheim while training Dungeoneering. They are tradeable inside dungeons but cannot be found anywhere outside Daemonheim.

These herbs are only able to be grown at Herblore Habitat. They are not tradeable.

Players can obtain grimy herbs via several methods, perhaps most notably by growing seeds via the Farming skill and as drops from monsters. They may also receive herbs from the Sorceress's Garden minigame, from their kingdom on Miscellania and Etceteria, from the closed chest, or as a reward from the Pest Control and Temple Trekking minigames.

Grimy herbs are available as drops from various monsters, including very low-level opponents such as men in Lumbridge. Some monsters drop more herbs than others. Looting a nature impling jar may give the player a clean snapdragon. Using a macaw familiar will significantly improve the quality of herb drops from monsters.

From the closed chest[edit | edit source]

Players can also kill Salarin the Twisted for the Sinister Key, which opens the closed chest. Players will receive two harralanders, three ranarr weeds, one irit leaf, one kwuarm, and one torstol. Both Salarin the Twisted and the closed chest are found in the Yanille Agility dungeon, and players need an Agility level of 67 to reach him. He and the Magpie Impling are currently the only non-player characters that drop the Sinister Key.

Salarin the Twisted can only be injured by one of the four elemental strike spells: Wind Strike, Water Strike, Earth Strike, or Fire Strike. Chaos druids and Chaos Druid Warriors are also found in this area.

Players can also grow their own herbs from seeds via the Farming skill. They need to obtain the correct seeds for the type of herb they wish to grow, and plant them in a herb patch. At high Farming levels this can be a very effective method of obtaining experience in both the Herblore and Farming skills.

The herb patch used during My Arm's Big Adventure can be useful, as herbs grown in it cannot become diseased. Players can also use the Pharm Ecology relic power to render all herb patches immune to disease. This requires level 81 Archaeology, as well as completion of A Fairy Tale III - Battle at Ork's Rift.

From the Miscellania kingdom[edit | edit source]

Players who have completed the Throne of Miscellania quest can receive grimy herbs from Miscellania (see Managing Miscellania). Players pay an average of 800 coins per herb collected using this method, and receive up to 80 grimy herbs per day, all tarromin or above, if they have enough money in the coffers and have herb-gathering set to maximum.

Player can obtain herbs from the Sorceress's Garden minigame, in which players work their way through a maze to reach a herb patch. Having reached the end, players can pick two random herbs before being teleported back to the beginning of the maze. This takes approximately 50 seconds. It was often crowded with bots because of the easy access and high profit of this minigame.

The lowest garden (Winter) can only yield herbs up to harralanders. The highest garden (Summer) can yield all herbs given normally as a drop besides Snapdragon and Torstol.

This information has been compiled as part of the update history project. Some updates may not be included - see here for how to help out!
Retrieved from ‘https://runescape.wiki/w/Herbs?oldid=35942136’
Categories:
Hidden category: