Friend in Need is an aura available as part of the Members Loyalty Programme and can be purchased from Xuan in Burthorpe, for 3,500 Membership Loyalty Points. Upon its release, it was on sale for 400 points instead of 3,500. On the third release of the loyalty shop, it was put on special again for 1,750 points. This aura summons Party Pete to distract opponents using the medium of dance. Distracted foes suffer a delay to their next attack, (10 ticks, AKA 6 seconds) but does not work in PvP. It is activated for twelve seconds and has a recharge time of fifteen minutes. Extending this aura with vis wax has no use, as Party Pete only stuns the opponents once.

Its usefulness is extremely limited as most dangerous monsters are unaffected and the recharge time is very long compared to the active time. Also while in use, another monster may attack you forcing you to attack him instead of your original target.

When this aura is activated, there is a 10 tick delay (6 seconds) until Party Pete stuns the opponents. The stun lasts for 6 ticks (3.6 seconds). Then there is a 4 tick (2.4 second) downtime until the aura is deactivated. If the aura is extended, this downtime is extended by the extended time.

The monsters that are not affected by this aura include: 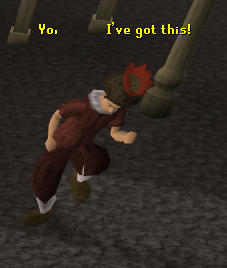 Party Pete summoned while not being in combat.

This information has been compiled as part of the update history project. Some updates may not be included - see here for how to help out!
Retrieved from ‘https://runescape.wiki/w/Friend_in_need_aura?oldid=35466382’
Categories:
Hidden categories: