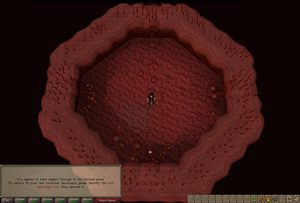 The Lost and Found office. 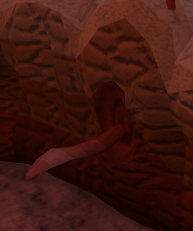 A possible appendage for you to pull.

Lost and Found is a random event in which players may be sent to a certain small room, called the abyssal plane, at any time. The player says "Uh? Help!" and is teleported there, getting a message that says "You have slipped through to the Abyssal plane!" Four levers are found on the walls; one of which will differ in some way, typically in position, the shape, or colour of the end.

Correctly solving the event results in being teleported from the room to your destination with a Random event gift.

Before the update[edit | edit source]

The event gave two different types of rewards, depending on what form of teleportation was being performed when the player was forced into the event. If the player was using a teleportation spell, they would receive the types of runes that they needed to use the teleport. If the player was being teleported to the Essence Mines, they would be given noted essence. The old event was mostly the same, having all of the features of the new one, except for a few crucial differences: