From the RuneScape Wiki, the wiki for all things RuneScape
Jump to navigation Jump to search
For the achievement, see Rune Memories (achievement).

Return to the Tower[edit | edit source]

Speak with Ariane who is in the ruins beneath the Wizards' Tower. There is a dungeon link on the north east side of the tower. You must pass through two doors in the ruins before you reach Ariane. She will tell you she wishes to investigate the vortices further and requires your help. Accept and start the quest.

Once you accept the quest, Ariane will attempt to cast a spell, but it will lead her to be trapped within the power beam. In order to aid her, Ariane will give you a prepared fire rune and a prepared air rune. Use the fire rune on any red vortex, and the air rune on any grey vortex. Doing so will absorb the soul fragment contained in the vortex into the rune, making the rune glow.

Speak with Ariane again. She will tell you to use the runes to try and trigger a memory in the Library. 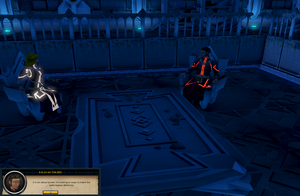 Viewing the memories of Kelavan the Red and Mei the Grey

Head through the entrance to the library (east of Ariane), and you will see four chairs. If you examine these you can see that they are red, blue, grey and green. Use the glowing fire rune on the red chair and the glowing air rune on the grey chair. This will trigger a cutscene of a memory between Kelavan the Red and Mei the Grey You will see Kelavan presenting his studies of a combat spell problem to Mei. Mei sees this as a possible solution to the 'Teleportation Problem'.

The Meeting of the Head Wizards[edit | edit source] 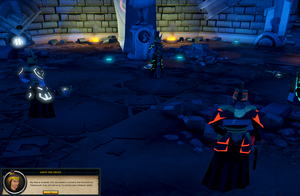 The Head Wizards gather to discuss the discovery of Teleportation.

At this point, remember what soul each of the following Glowing runes represents:

Talk to Ariane again and she will tell you to try and trigger a memory upstairs in the Statue room in the Old Tower. Go back up the staircase, and past the statue you knocked over in the first quest, and to the statue room, in which you first met the Rune Guardian guarding the entrance to the old tower. Use the runes with the corresponding statue as presented below. A cutscene will begin.

The Green Master will present the same idea that the Red Apprentice had in the first memory, having stolen it and claimed it as her own work. She will give each master a copy of the idea, and they will return to their studies to discuss the plan with their apprentices.

After the cutscene, the runes will be returned to your inventory. Return and speak with Ariane once again.

Memories of the Abyss[edit | edit source]

When you speak with Ariane, she will be horrified to learn that the Wizards of the Old tower were not above such pettiness as to steal each others ideas, and will ask you to go and trigger another memory in one of the studies of the four masters.

Azacorax, Keeper of the Key to the Abyss is summoned.

Head north through the studies door and then to the Red Master's study, which is to the north-east. Use the chaos rune on the Master chair, and the fire rune on the chair across the table. This will trigger a cutscene of a memory where the Red Master and Apprentice talk about how Azris the Green stole his idea. And that instead of trying to convince them it was his idea, they would just complete the research and be the first to come up with a ritual to use another plane to support teleportation. At the end of the cutscene you will see the Red Master summon a demon named Azacorax.

After the cutscene the runes will be returned to your inventory. Return and speak with Ariane. 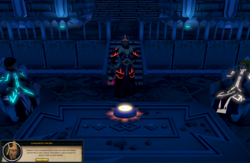 Zanmaron tells the apprentices to prepare themselves for the creation of the beam.

Once again speak with Ariane and she will tell you to trigger a memory in the library. Head to the library (east of Ariane) and use the air rune on the grey chair, the water rune on the blue chair, the fire rune on the red chair, the earth rune on the green chair, and the chaos rune on the table. This will trigger a cutscene of the Red Master and all the tower apprentices. He will announce he has finished a ritual to open a passage to the abyss, and presents each apprentice with a copy of the ritual to deliver to their Masters. He stresses that the ritual must be done exactly as stated or disastrous consequences could ensue.

After the cutscene the runes will be returned to your inventory. Return and speak with Ariane.

Ariane will tell you she thinks if you can trigger the memory of the ritual, she may be set free. But as the ritual had to be so specific, and you don't know how it was done, you must search for old documents containing information on the ritual.

Head back to the library (east) and search the shelves along the north-west walls and to the east straight past the table. There are 2 document fragments to find here. Then head to the studies to the north of Ariane. The crates/chests in the destroyed studies are now searchable. Each room is labelled by the corresponding flag outside of the room. Search the Grey room, then the Blue room, and finally the Red room. There is one document fragment in each of the 3 remaining studies, plus a Diary in the Zamorak room within the same crate. Return and speak with Ariane once you have all 5 document fragments and the diary.

Ariane will tell you to read the documents to decipher where each rune must be placed to trigger the memory. 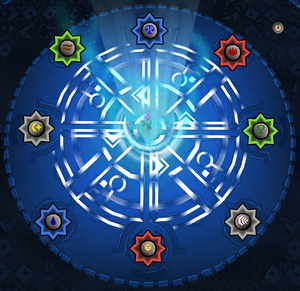 Image of how the Masters and Apprentices should be placed.

The runes should be placed as follows; you must have all of the document fragments for this to work.

A cutscene of the wizards performing the ritual will begin. They will get partly through the ritual before the Blue wizards leave in anger as they realise the ritual consists of pure Red magic and involves demons. They break the ritual, and a lightning beam strikes down the Red Master. The cutscene ends, and Ariane is freed from the beam. However, she notices that the ritual is happening again, and Ariane pushes you out of the way while a similar bolt of lightning strikes her down and induces a magical coma.

Investigate Ariane and you will see that you should go and speak with Wizard Ellaron; Wizard Ellaron has now moved to the entrance of the tower. You will discover that he is part of a Secret Order of Red Wizards who mean to destroy the Wizards' Tower, and that he planned the whole thing. Go through all the options until Ariane rises up from the middle of the beam in the tower. 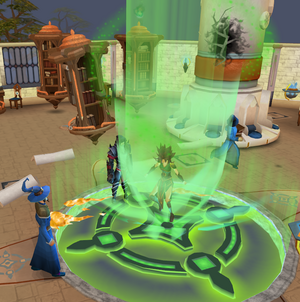 Speak with Ellaron who is located at the entrance desk next to Valina, and you will learn that Ariane is being possessed by each of the souls from the old tower. You will need to draw them all out of her using the prepared runes you have in order to save her and stop her from exploding causing the destruction of the tower.

The beam around her will flash between red, grey, blue, and green. There are two types of beam styles: a simple coloured beam that contains an apprentice's soul, and the spinning, more elaborate beam that contains a master's soul. You will need to take note of the wizard or apprentice that speaks to you through Ariane, then use their appropriate rune on Ariane the next time the matching beam appears.

First, wait for the elaborate grey beam, and use the cosmic rune on Ariane. Next is the simple blue beam, which requires a water rune. She will then ascend to the next floor; follow her up.

Now wait for the simple green beam, which requires an earth rune. Then use the fire rune on Ariane when you see the simple red beam. She will again ascend to the next floor; follow her up.

Then, wait for the elaborate blue beam, which requires a law rune, followed by an elaborate green beam, requiring a nature rune. She will then ascend to the next floor; follow her up again.

Note: Your avatar must complete the casting action while the beam is active in the actions listed. If you have lag you may need to anticipate the beam colour change. Once you are successful with matching the rune to the beam, that style of beam will be removed from the rotation of beam styles.

Once you have drawn out all the souls, Ariane will be free. The souls will then possess Wizard Ellaron, and teleport him to the Abyss where he will supposedly explode, saving the Wizards' Tower! 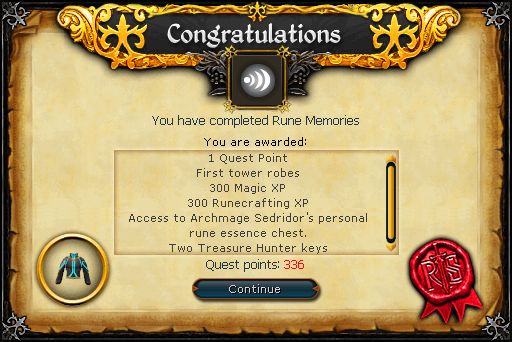 Rune Memories is directly required for the following quests/miniquests:

The Teleportation Beam
The unlisted track that plays when the teleportation beam is created.
Retrieved from ‘https://runescape.wiki/w/Rune_Memories?oldid=35832335’
Categories:
Hidden categories: