Trouble in the library[edit | edit source] 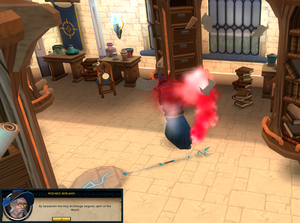 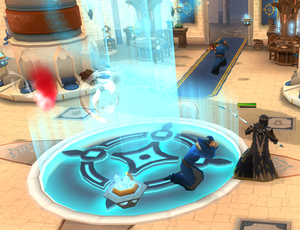 Luring the vortex into the beam

Talk to Ariane at the entrance of the Wizards' Tower, who is trying to convince Wizard Valina to allow her access into the tower because Ariane believes there is a serious threat to it. However, Valina refuses because Archmage Sedridor forbids her entry for any reason. It is then that she asks the player to pass the message to Sedridor.

Suddenly, a cutscene ensues showing a magical vortex attacking Wizard Borann the librarian. You and Ariane attempt to enter the tower but Ariane is warded off by a spell and falls to the ground. She tells you to lure the vortex to the centre of the power beam by casting Air Strike on it. You can pick up the tower mindspike (air) west side next to Borann if you don't have any air runes.

Stand at the other side of the beam, set a spell to auto-cast and attack the vortex to lure it into place. The spell can fail, especially if you have low magic accuracy from wearing melee armour. You must not be wearing any melee armour for it to work. You must use an Air elemental spell (from either the standard or Ancient spellbook). Keep doing this until the vortex moves to the centre of the beam, then it will disappear. Although magic abilities can be used to lure the vortex, it is not recommended as it is much harder to control.

Talk to Ariane outside the tower by the bridge. When asked why she was not allowed to enter the tower, she reveals herself to be a seer. She tells that at the Tower students are taught that anyone can learn magic even without talent, but that being a seer is passed on through the family. As such, the other students resented Ariane for it. She had asked her mentor, Wizard Ellaron, to help her suppress her powers, but instead he helped her develop them. At some point, she had an encounter with the Tower's demon, who made the conversation look as if she were a Zamorakian, and used magic not from the Standard Spellbook, which ultimately lead to her expulsion by Archmage Sedridor. Hence, he regards her dangerous enough to put up a ward spell against her.

Ariane also tells about the old Wizards' Tower. One hundred years ago, the Wizards' Tower was divided in four orders: the Red, Blue, Green and Grey Wizards. When they found out the secret of the Rune Mysteries, the teleportation spell to the Rune Essence Mines (Senventior disthine molenko), the Red Wizards turned against the others, which somehow led to the Tower being burnt down. Archmage Perien had the tower rebuilt, sealed the old Tower's ruins and banished all Zamorakian Red Wizards.

Ariane has seen the tower in flames in one of her premonitions, which generally show the truth. Being stuck outside the tower, she asks you to talk to Archmage Sedridor, Wizard Ellaron and the other wizards to try and find out if anything unusual is happening lately. Enter back into the tower and ask wizards if they've seen anything unusual.

Return to Ariane and tell her about Traiborn's observations of the creatures coming from the library floor. She will tell you more about the history of the tower and how it was destroyed many years ago by Zamorakian wizards. The new tower was built upon the ruins of the old tower, whose underground levels were sealed off by the first Archmage of the New Tower, Archmage Perien. Ariane will tell you of an old rumour that the door to the ruins can be unlocked by casting Water Surge, but many wizards have tried that to no avail. 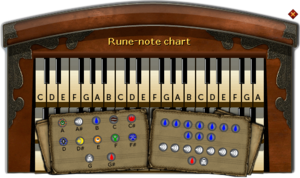 Go back into the tower after speaking with Ariane and talk to Wizard Ellaron in the north-eastern room after ascending the beam twice. Talk to him about accessing the ruins. He states that not even senior wizards have permission to access the ruins, therefore making it impossible for him to tell "an ex-wizard" and "an outsider" how to do so. Ask him if he knows how to enter the ruins and he will tell that only the archmage is allowed to know the secret. Talk to him about the Water Surge rumour, and he will hint that understanding the spell might be the key. Ask him about the ruins and he will tell you of how it was sealed by Archmage Perien, and his great understanding of Magic. He will tell you that he wrote a book on the relation between Magic and music. Ask if this is a hint and he will deny it, but will tell you that the book is available in the ground floor[UK]1st floor[US].

Descend the beam twice to return back to the ground floor[UK]1st floor[US] where you will be able to find the book. The book is located in the most eastern floating bookshelf. You will find The Harmony of the Runes and The Runes of the Spells of Water. Both books can be right-clicked to view an attached diagram in each.

Read both the books first, which will allow the notes to be placed automatically on the organ. Go to the southern part of the ground floor[UK]1st floor[US] of the tower and play the organ. You will have to play the notes in a specific sequence, as shown by the diagrams on the screen. You will need to click on some black keys and some white keys to play it, you can hover over keys to see what they are. Play the following notes the number of times shown to get the key:

If you play it correctly, a Wizards' Tower basement key will appear on the interface. Click it to add it to your inventory. 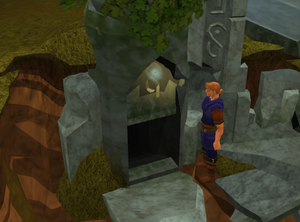 Tell Ariane you have the key and she'll be inquisitive of the content of the old tower, wishing that she could find knowledge that might have been lost for hundreds of years. She will tell you that the entrance to the ruins is to the east of the tower, down a small flight of steps.

Go east and you will find Ariane near some ruins. Talk to her and she'll tell you to open the door. Walk down the nearby stairs and use the Wizards' tower basement key on the door to open it. If you click outside of the chatbox before the door opens and you enter, the door will not open and the key will disappear. In this case, you must go back and play the organ again as above to retrieve the key.

A cutscene of you and Ariane entering the basement will play. She will tell you that this must be the Chamber of Shrines, which was used as a meeting room and the place where apprentices would pledge allegiance to one of the four orders. You can ask her for more information about orders which were created to cater the different philosophies of Magic. You will need to go deeper in the ruins but there is a rune guardian blocking the road.

Talk to the rune guardian and it will begin talking about a test. Ariane will explain that the guardian thinks you are new wizards joining the tower. The test consists of 5 questions.

Question 1: "You are behind in your studies due to illness, and a test is coming up. Your place at the tower is safe, but if you fail you will lose some respect. Another apprentice offers you an opportunity to cheat."

Question 2: "An elderly wizard - the last practitioner of a unique branch of magic - dies. Her diary might contain details about her unique magic, but her will states that the diary should be destroyed on her death."

Question 3: "A rival wizard is spreading lies about you and has made you the laughing stock of a nearby village. They believe you are of low intelligence and poor moral character, and throw vegetables at you when you visit. What do you do?"

Question 4: "You have become a senior wizard and are asked to take on an apprentice. The boy is talented but undisciplined and does not apply himself out his areas of interest. What is your approach?"

Question 5: "A senior wizard asks you to take part in a ritual that will greatly benefit the tower. Before the ritual starts, you discover that he learned part of it from a demon. The ritual appears safe, but demons are expert liars."

After the guardian determines the order you belong to it will allow you to proceed. Enter the door that was behind it.

If you land in between two orders you will be asked one more question:

Question 6: "You are balanced between two orders. A final question: which of these do you value most?"

Answers:
(Only two of the above possibilities will show) 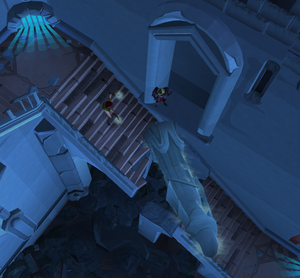 Knocking over the statue

Talk to Ariane in the new room. You will see a gap in the stairs and Ariane wants you to find a way to cross it. Climb behind the statue in the wall south of the gap and make a bridge by pushing the statue down. Cross the newly made bridge then climb down the staircase at the west of the room.

Talk to Ariane about the new room to find out more historical information about spells. She will tell you that the vortices you see are like the ones that attacked Wizard Borann so she wants to find out what they are. 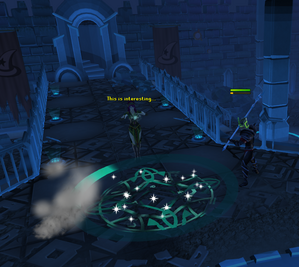 Keep the vortex inside the marked area.

You are going to need to lure one of the vortices (doesn't matter which one) to the circle Ariane creates and keep it in the circle until she has finished examining it (around one minute). You can lure a vortex towards you by casting a magic spell on it (you need to take off all your armour to lure the spell). The vortices will keep moving around, so it's expected that it will get out of the circle more than once. The timer slowly resets when the vortex get out of the circle. Tip: Luring multiple vortices at once will make the timer less likely to reset.

The vortices aren't ghosts as Ariane first thought they might be. They are soul fragments. She will explain that the old wizards put part of their souls into the power beam to create a very powerful magical effect. However, this looks like it went wrong. Ariane thinks this might be what destroyed the first tower. She tells you that an enchantment might have sealed the vortices and someone removed it which allowed the vortices to go up the beam into the tower. Someone came to the ruins very recently and removed this enchantment. Ariane can replace the enchantment, but this will take some time. She will ask you to go to the new tower and delay Sedridor's plan. (You must answer 'Okay I'll do it' for Ariane to not follow you back up.)

Retrace your way out of the ruins and enter the tower. You will see Sedridor and three wizards casting Icyenic Purge. Try talking to Sedridor and he will simply ignore you. Play the organ twice, pressing random keys on the lowest keys on keyboard to break the wizards' concentration. You will annoy Sedridor and see a cutscene of Ariane preparing the enchantment. Play the organ once more, and see another of her casting the spell.

After the cutscene, head back to Ariane who is standing outside the entrance of the ruins and talk to her to complete the quest. 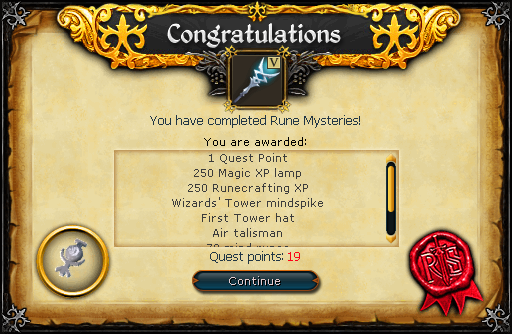 Rune Mysteries is directly required for the following quests/miniquests: