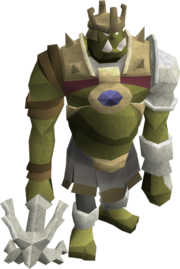 Gromblod appears in the quest A Fairy Tale III - Battle at Ork's Rift.

In the second briefing by the Tooth Fairy, he and the Fairy Godfather can be seen recruiting ork warriors from the rift into Zanaris.

He is located in the Enchanted Valley (fairy code BKQ). Players must retrieve his tooth by giving him a mango. He will eat the mango and then spit out mango with tooth. Gromblod's tooth is then used to grow an ivory version of him in order to combat Fairy Godfather. He is killed by the player in the final battle.