From the RuneScape Wiki, the wiki for all things RuneScape
Jump to navigation Jump to search
This article is about the non-player character. For the achievement, see Tooth Fairy (achievement).
Tooth Fairy? (edit) 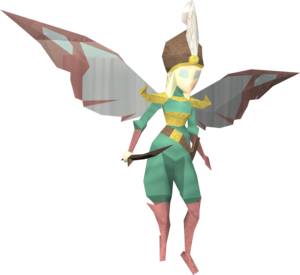 The Tooth Fairy is a commander serving Fairy Queen after the Godfather takes over Zanaris. She plays a large role in A Fairy Tale III - Battle at Ork's Rift, coming up with the plan to get rid of the Fairy Godfather.

After the aforementioned quest, she will buy certain kinds of tooth from the player:

After completing A Fairy Tale III - Battle at Ork's Rift players may claim a tooth pet from her. For this you need to bring her kebbit tooth, suqah tooth, old tooth, monkey dentures and human child's tooth. Note that teeth sold to the tooth fairy will not count towards this.

During A Fairy Tale III, the Tooth Fairy can be found in the projector room in Fairy Resistance Hideout.

After A Fairy Tale III, the Tooth Fairy can be found in the throne room, south of the Chicken Shrine.

Concept art of the Fairy General