Operation: GUM is the deciding battle of the war between the fairy resistance movement and the current fairy leader, the Fairy Godfather. The battle takes place at the end of A Fairy Tale III - Battle at Ork's Rift.

Prior to the war[edit | edit source]

In the year 169 of the Fifth Age, the Fairy Godfather seized control with a coup against its current leader, the Fairy Queen. The Fairy Godfather has poisoned the Queen, and took her magic secateurs, which were required to make the cure. Eventually the player finds out that the secateurs were dropped by the fairy godfather at the tanglefoots. Though the player, not knowing of the coup, gives them to the Godfather, thus giving him most of the Queen's powers. After this the Godfather occupies the city with orks.

The player soon finds out that this was a bad move when he finds out about the fairy resistance movement, who tell him to return the secateurs by means of stealing them from the Godfather. Most of the Fairies living in Zanaris are suspicious, but yet unknowing. While the Queen heals, her fellow resistant fairies make a plan.

The following takes place during A Fairy Tale III - Battle at Ork's Rift.

The movement quickly grows, as more and more injured fairies are forced to leave Zanaris and require healing. Meanwhile the Godfather has fully occupied the city with orks, creating a dictature. To get these orks, he utilises the Queen's power to open a rift on a location in Zanaris where there is little resistance and almost no magic barrier. He summons 3 generals to the realm (General Shredflesh, General Bre'egth and General Gromblod) in order to recruit new orks for the war.

For his own protection, the Godfather uses the Queen's power to create a protective field around him so he won't be able to get hurt, though he can still be hurt by his Ork generals, thus making killing him almost impossible.

After long planning, the movement has decided to go over to action. They've made up a plan to kill the Godfather - by means of creating 3 ivory statues using the teeth of the 3 ork generals. The usage of Teeth Magic has been practised and tested for a long time by many fairies, including the Tooth Fairy. The player recovers a tooth from each ork general, and as such the battle will commence. 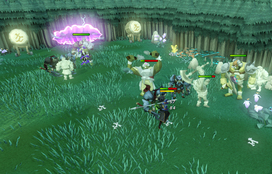 The Player and the Ivory Orks fight General Bre'egth.

After arriving at location, the player enters the area in front of the Orks Rift, where he meets the opposition. The Godfather had dismissed his henchmen Fat Rocco and Slim Louie to take over Zanaris, and to kill everybody. The player manages to plant the three teeth seeds, which gives the player a small advantage. Though these take long to grow.

The player single handedly kills the 3 ork generals and several orks summoned by the Godfather. Meanwhile the Ivory statues have been grown and have destroyed the Godfather's shield. The player and the statues manage to weaken the Godfather enough for the Fairy Queen to banish him to the ork realm. After sewing closed the rift, a large explosion occurs due to the Godfather being too evil for the rift. Before he was sucked into it, he cursed the fairies, the player and the tooth generals. After the explosion, three cursed Ivory statues attack the fairies, after which the Queen teleports all to the War room in the Fairy Resistance Hideout.

Currently the Ork's Rift is almost completely destroyed, and only several ivory statues remain. However, these have been cursed by the Godfathers last, evil magic, therefore making the area uninhabitable.