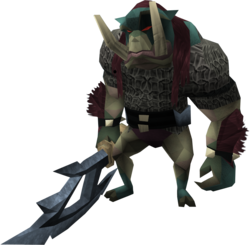 Orks are stocky, green-skinned humanoids and some of the most prominent soldiers in Bandos' former armies. They have large tusks protruding from their jaws and prefer to use large axes or maces in battle, although there are some known ork mages and rangers.

Undead versions of the orks, known as revenant orks, can be found in the Forinthry Dungeon. They are the ghosts of orks that were slain in the God Wars. They are much more powerful than their combat level suggests, being able to hit hard and perform surprising tricks. 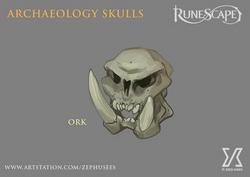 Originally, the orks were a gentle and moderately intelligent race living in Yu'biusk; a green and fertile place in an alternate dimension from Gielinor. Sometimes conflicts between other species did happen, but organised warfare was nonexistent during that time.

However, Bandos arrived looking for soldiers to fight in his army in the Gielinorian God Wars, became the orks' official deity, and then sent them to fight for him in Gielinor. Orks were among some of the instructors who trained the goblins at Warforge, where their swords can be excavated and restored.

In the Sixth Age, the orks participated in Bandos' battle against Armadyl, serving as bodyguards. Bandos constructed the Scarecrow, while Armadyl constructed the Divine Focus, weapons using anima to kill the opposing god. At the end of the battle, Armadyl's forces were able to acquire more anima than Bandos' forces, and the war god was instantly killed when Armadyl fired his weapon.

Wikipedia also has an article on: wikipedia:Ork