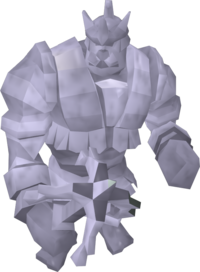 Cursed Ivory Gromblods are available to kill after the A Fairy Tale III quest in the Ork's Rift, where you banished the Fairy Godfather.

Cursed ivory orks have an unusual respawning mechanic: when one of them is killed and eventually respawns, it would reappear not where it normally wanders, but in one of the farming patches at the south edge of Orks Rift, before attempting to walk back to their original location. Bre'egth respawns on the east patch, Gromblod respawns on the middle patch, and Shredflesh respawns on the west patch. After killing a few of your chosen type of ork, you can simply stand next to their associated patch and kill them there endlessly as they respawn. This is particularly easy with Bre'egth as she is aggressive, but you can also use aggression potion for the others.