The Fairies are a small race of winged humanoids that occupy the city Zanaris, along with the Mindslayers and Otherworldly beings. Although they resemble small humans, they are not too dissimilar from bugs, with their quick beating wings, antennae and wide eyes. They're also part mushroom.[1] The fairies were created by Bik in an effort to create a perfect world. [2] They share a common ancestry with two other species encountered by Guthix elsewhere in the universe: a species of parasitic mushrooms, which attached themselves to the nervous system of other animals; and a species of teleporting insects whose migration had the ability to affect the climate. [3]

Suffused with anima, the fairies are embodiments of magic and intrinsically bound to the planet Gielinor. Their own wellbeing is tied to the planet, forcing them to regulate its weather and seasons for the sake of their own survival. However, they do so without complaint.[3] They operate from Gielinor's moon, Zanaris, and are co-ordinated jobs by the Co-ordinator. There are Autumn Fairies, [4] Winter Fairies,[5] and presumably also fairies for other seasons not mentioned by name.

According to Chaeldar, the majority of Fairies are Guthixian, but there are exceptions.[6]

The Fairies have lived in Zanaris for a long time, since before Guthix arrived, although their native homeworld is Cheanannais. They describe Zanaris as 'the nexus of all planes' by the Co-ordinator and Fairy Godfather. When the fairies arrived, they found Zanaris to be a place with many dormant magical properties, such as those of the ability to jump between planes using a powerful portal that had been sealed for centuries. The Fairy Queen harnessed the magic of this portal, and used it to create the network of fairy rings. The god of balance, Guthix, later travelled to Zanaris while searching for a world in the First Age, and upon finding Gielinor, he used Zanaris to bring peaceful races to Gielinor.

Fairies appear to live in the air and fly around frequently. They rely heavily on magic and delight in mischief. Fairies are mysterious to outsiders, who know little of their culture and history. Indeed, many of the other mortal races would happily deny the existence of this tiny race, as most believe fairies are imaginary creatures. They seem to have some relation to the pixie race. The fairies also seem to be a female-dominated race.

Concept art by Jagex containing variations on the current look for fairies, using the Fairy Queen as a basis. 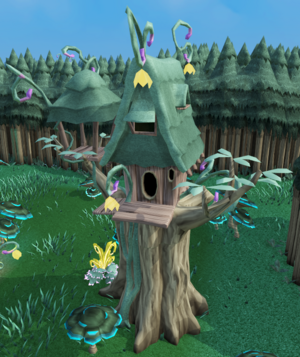 The fairies are involved with the following quests;

A stamp featuring a fairy from a postbag.

The old flying animation for a fairy.