Crop circles can be found in some wheat fields and are created when an imp appears and starts walking around in a circle within the wheat field. Most are temporary, appearing for around 15 minutes and then disappearing. The sole permanent crop circle can be found in Zanaris. Crop circles provide the means for Hunters with a level 17 or higher to teleport to Puro-Puro for the minigame Impetuous Impulses. The minigame unlocks the music track "Impetuous".

When a player nears an active crop circle, the game music changes to variation of "Impetuous". The actual notation of unlocking the song will not be reflected on the music interface until the player actually travels to Puro-Puro.

If a player enters Puro-Puro through a crop circle outside of Zanaris, the player will receive a 30 minute blessing which will give them the ability to pass through wheat in Puro-Puro faster. The remaining blessing time is displayed near the upper-righthand corner of the gamescreen, next to the mini-map. This was introduced on 23 February 2010 and is called the Farmer's Affinity Bonus. 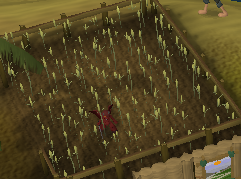 An imp making a crop circle in Brimhaven.

So far, the following wheat fields have been confirmed as locations where crop circles can occur:

Crop circles occur in groups of 2, and you can determine where they are currently located. Simply visit the wandering impling in the Zanaris wheat field, who has a right click option, "check-gates".