Lost City is a quest about the fairy land Zanaris. A group of adventurers have set up camp in Lumbridge Swamp, claiming to be searching for the mystical lost city. You must find the truth of this claim, and gain entrance to the moon of Gielinor, Zanaris. 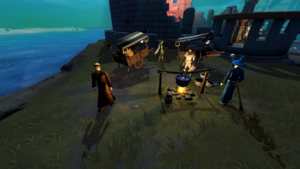 Head to Lumbridge Swamp and locate a group of adventurers, a warrior, archer, wizard, and a monk, at a campfire near Father Urhney's house. Talk to the warrior and ask what he is doing. When he refuses to tell you, ask: 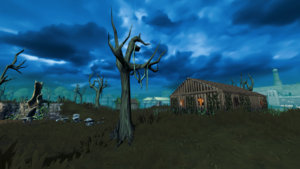 Look for a swamp tree to the east of the camp. It is the first tree to the west of Father Urhney's house. The tree can be easily identified, as it is the only tree with the option "Chop Swamp Tree" instead of "Chop down Swamp tree". Chop the tree and a leprechaun named Shamus jumps out. Ask Shamus how to get to Zanaris and he tells you that you need a dramen staff. To get this, you need to chop down a tree inside of the Entrana Dungeon, and at the end of the conversation, he offers to teleport you to Port Sarim docks.

Entrana enforces a policy of nonaggression, meaning that weapons, armour, combat auras and certain magical items cannot be taken onto Entrana. However it is possible to bring the raw ingredients for creating weapons and armour, such as leather or dragonleather and thread along with bowstring and logs for ranged gear; spider silk, batwing and mystic cloth thread to make a wand. Other useful items to bring include ammo such as arrows and runes, which can be taken onto Entrana already made, robes such as monk, priest, Citharede or druid for the prayer boost, potions, food, an emergency teleport and a ring of life. See here for a full list of permitted items.

Take your choice of items to Port Sarim, talk to the monks on the dock, and travel to Entrana. Do not make your items yet; You will be searched and prevented from boarding the ship.

When you get off the boat at Entrana, make and equip your armour and weapon, run east, then north past the temple and west after the bridge. You find a monk next to a cave entrance. Equipment made here will not result in expulsion to the mainland.

As soon as you go down into this cave there the only exit is via a door that leads south of Draynor Village. Once ready, talk to the monk and enter the dungeon. Upon entering the dungeon, your prayer is reduced to 100-400 points.

Travel through the cave until you see some greater demons and a small cave to the south. Run past the demons into this cave and cut the dramen tree with your hatchet. 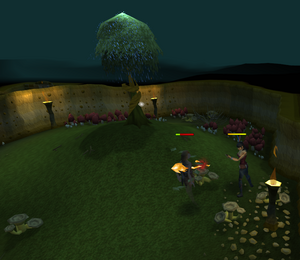 A safespot to fight the tree spirit from.

A Level 63 Dramen tree spirit appears. It is possible to attempt to melee the tree spirit, but it hits up to 200 accurately and absorbs most melee attacks, so plenty of food such as lobster is recommended. There is a safe spot on the southern wall, between 3 mushrooms, where you can spot trap and attack her while quickly running back to the safe spot to avoid damage. The tree spirit is susceptible to fire spells, so the Fire Bolt spell or above should be used with a imp horn wand, spider wand, batwing wand or mystic wand. Lower level runes can easily be bought at Port Sarim on the way to Entrana.

If the fight takes too long, the tree spirit returns to the tree and fully recovers.

It is possible to have multiple people attack the tree spirit.

The shed leading to Zanaris.

The City of Fairies[edit | edit source]

Open the magical door east of the greater demons which leads south of Draynor Village or teleport to Lumbridge. Wield the dramen staff and locate the shed in the middle of the swamp. Enter the shed to be transported to Zanaris. 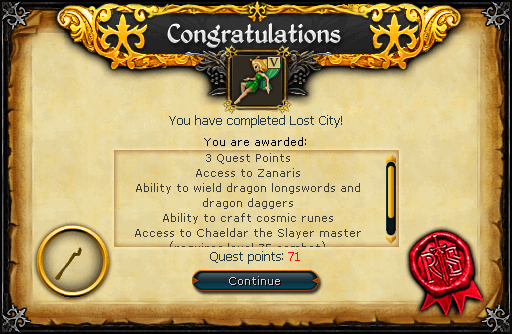 Lost City is directly required for the following quests/miniquests: