The most effective strategy to kill the mercenary is to rush. As the Mercenary leader will only summon new Forgotten mages, rangers and warriors when the player is in the room directly outside the Mercenary room, it is an effective maneuver to make Gatestones and drop them two squares from the Mercenary room. Then, just use Protect from magic, rush the Mercenary, and teleport out if too many of its summoned warriors and rangers appear. Do not worry about the mages, as you'll be praying against their attacks anyway. Wait until all the summoned minions disappear, then repeat the process. It is possible to complete this puzzle without dying once with this strategy. It could also be a good idea to drop a personal gatestone next to the mercenary and teleport in after the room is cleared. Using this strategy will save you a lot more prayer points. However, if you are soloing and do not have any laws, and if the leader is of a high level, you will most possibly be killed from the leader's mages, warriors, and rangers. 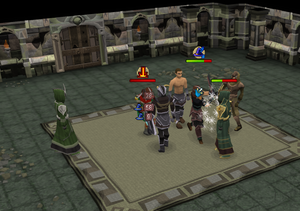 Alternatively, soloing players can wait outside of the room until there are only rangers and/or mages summoned. This is a notably effective tactic and saves food in the long run, because summoned rangers hit much lower for their level than the warriors, and the mages' attacks will be reduced by Protect from Magic. If a warrior appears, teleport out and wait for it to disappear or be replaced by a ranger or a mage. The downsides of this method are that it can dramatically increase the amount of time spent on one dungeon, and consumes large amounts of prayer points, which can be a problem if an altar has not been revealed or constructed. If you can make regular or strong rejuvenation potions, along with making the herbs and getting materials, feel free to do this method.