From the RuneScape Wiki, the wiki for all things RuneScape
Jump to: navigation, search
This article is about the Dungeoneering version. For the version available outside of Daemonheim, see Hexhunter bow.
Hexhunter bowHexhunter bow (b)? (edit)? (edit)

The Hexhunter bow has a Passive effect that allows it to deal 20% more damage when used against monsters that use Magic.

The Hexhunter bow is treated as a shieldbow, thereby allowing defensive abilities that require a shield to be used.

It is the only weapon in Daemonheim that has a passive effect, and one of three items in Daemonheim to have one; the others being the blood necklace and Shadow silk hood. 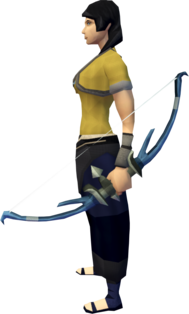 Before the Evolution of Combat, the Hexhunter bow had a somewhat different passive bonus: its ranged damage increased as the opponent's Magic level increased. This made it one of the most desirable items in Daemonheim, as it could hit very high and accurately on forgotten mages, necromancers, reborn mages, demons, and dragons. Its damage per second easily exceeded the damage per second of the most damaging melee weapons, and it was a far more damaging weapon than any other bow in Daemonheim. The bow was also very good against most bosses (even those that would not seem to have high Magic levels, like Dreadnaut and Gravecreeper, though this was most effective when employing the use of a Bloodrager's Sundering Strike special attack to lower the boss's Defence).