From the RuneScape Wiki, the wiki for all things RuneScape
Jump to navigation Jump to search
Catbot 9000? (edit) 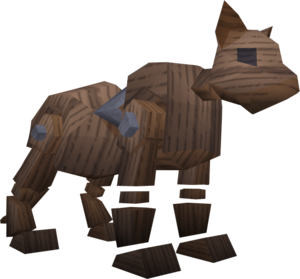 Catbot 9000 is a clockwork cat in New Varrock that demands players buy doogle leaves from zombie Xuan. He is one of four cats, along with 'Fraidy cat, Baron Mauser and Grumps that the player needs to shoo away for Cat's Bane achievement. He can be found in front of Varrock east bank.

After the completion of the achievement Cat's Bane he can be found at the graveyard on the west New Varrock bank trying to resurrect Fluffs. After Fluffs is resurrected, he and the other cats return to Gertrude's house.