From the RuneScape Wiki, the wiki for all things RuneScape
Jump to navigation Jump to search
Medjed? (edit) 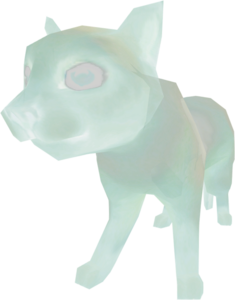 Medjed is a ghostly cat that can be found north-west of the entrance to Croesus's arena, within The Croesus Front in Senntisten. He considers himself to be the Lord of the Underworld and the Dead.