From the RuneScape Wiki, the wiki for all things RuneScape
Jump to navigation Jump to search
This article is about the cat. For the Void Knight, see Knight Diana.
Diana? (edit) 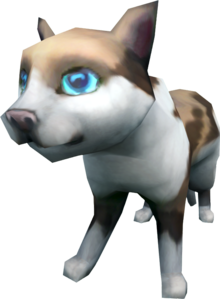 Diana is a cat initially found in the south-western part of the Nodon Front, next to some crates. Unlike most non-player characters, she does not appear on the minimap as a yellow dot. If she is talked to while wearing a catspeak amulet, or a cramulet containing one, she can be given a cup of tea to convince her to move to Het's Oasis.

After being given the cup of tea, she can be found on the section of Het's Oasis Agility Course just to the north-east of the cultivatable hollyhock bush.