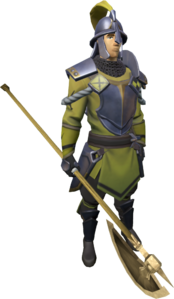 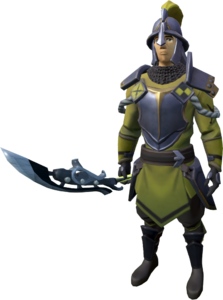 Captain Milo Rovin is a prominent captain of the Varrock guard. He takes his job very seriously, questioning players for entering restricted areas. Players can also choose to tell him about the castle's ale delivery, in which he will direct it to the kitchen staff.

The captain can be found on the second floor of the north-west tower of the castle, at the top of a spiral staircase. But other than quests and dialogue, he has no use.

Rovin has held the position of captain in the Varrock guard since year 160 of the Fifth Age, as stated in the Varrock Census. He oversees the city's military budget and defences, even though the guards suffer from continuous pickpocketing, casualties and high turnover rates, the latter of which he appears to be oblivious to.

In year 169 of the Fifth Age, Rovin encountered an adventurer snooping around the restricted areas of the castle. The adventurer simply told Rovin that they were just looking around. Seeing that the adventurer could prove to be helpful, Rovin explained to the adventurer that one of his scouts, Hartwin, spotted organized zombies in the Wilderness; zombies are incapable of organizing themselves, and Rovin suspected that someone might be doing so behind the scenes. As Hartwin was not capable of combat, Rovin sent the adventurer with him to investigate the leader.

The two discovered that Zemouregal was rallying a zombie army to attack Varrock once again, much to Rovin's concern. Upon learning that an attack was imminent, Hartwin suggested to use the Shield of Arrav. Rovin was skeptical that the shield could protect them as they could not unlock its powers, but sent the adventurer off to find Thurgo while he began preparing for the city's defence and had the shield moved to the castle for protection.

After Zemouregal's failed invasion, the same adventurer returned with grim news from the east - Vanescula Drakan was going to invade Misthalin to expand vampyre society, and the vyres could breach the blessing placed on the Salve. Roald immediately scolded Aeonisig for not acting fast enough, who immediately sent Rovin with two scouts to monitor the situation. Rovin and his subordinates arrived alongside the adventurer and Aeonisig, just as a few vyre scouts arrived and attacked. Rovin tried to help the adventurer fend the vyre scouts off, but his silver-coated weapon was ineffective.

The adventurer killed the two scouts with ease with their own weapon, before Aeonisig told them to speak with Rovin. The adventurer met with Rovin, who requested they bring him and his subordinates steel armour and better weaponry. He explained to the adventurer that any other material above steel would be too expensive. The adventurer suggested blisterwood weaponry, so Rovin requested a polearm for himself and two sickles for his scouts. They returned with the armour and weapons, which made the three more confident to take on the vyres. He witnessed the debacle between the adventurer and Vanescula.

Rovin and his men remained on high alert for a third attack, but fortunately, war was averted thanks to the adventurer's actions.

The following takes place during Dimension of Disaster: Defender of Varrock.

Rovin was killed and reanimated by Zemouregal, where he prohibits living humans from climbing up the stairs to the 1st floor[UK]2nd floor[US] of the castle. To fool him, a full zombie outfit must be worn. He dies at the end of the quest series, after Arrav kills Zemouregal.

This information has been compiled as part of the update history project. Some updates may not be included - see here for how to help out!
Retrieved from ‘https://runescape.wiki/w/Captain_Rovin?oldid=35826665’
Categories:
Hidden categories: