From the RuneScape Wiki, the wiki for all things RuneScape
Jump to navigation Jump to search
The Old School RuneScape Wiki also has an article on: osrsw:Ellamaria
Ellamaria? (edit)? (edit)

Queen Ellamaria Remanis is the queen of Misthalin, ruling alongside her husband King Roald Remanis III from Varrock, Misthalin's capital. She is unpleasant to people, talking down to those she considers beneath her and being difficult to work with and please.[1][2] She even intimidates her husband.[3] Her ferocity is respected even in Asgarnia, where the Warriors' Guild have a statue of her.

Despite her status, she was born a peasant and worked as a barmaid in the Blue Moon Inn.[4] During the wyrd attacks of year 164 of the Fifth Age, she was very critical of the cover up being done by the Society of Owls, accosting the Asgarnian Sir Theodore Kassel for his role in it. She snuck into the Midsummer Festival party held by King Roald, wearing clothing not suited to her station, and was arrested when she tried to approach the king, as Sir Theodore believed her to be a threat. When King Roald held a parliament to discuss the attacks, she was brought forth as a representative of the common people. She was later released and cared for Ebenezer, a scientist who had accompanied Sir Theodore, after he fell ill. During this time King Roald made frequent visits, though many suspected this was to visit Ellamaria.

The following takes place during Garden of Tranquillity.

In Year 169 of the Fifth Age, Queen Ellamaria recruited an adventurer to build her husband a high-end garden despite his allergies, requesting that they do so without using violence.[5] She went to great expense to building her garden, including importing high-quality soil,[6] killing off the last white tree (albeit regrowing it in her garden),[7] and having statues stolen from Lumbridge and Falador. When Roald criticised the garden, she flew into a rage, forcing a compliment out of him and dismissing him. In return for the adventurer's assistance, she gave them a compost potion to allow them to make supercompost in an instant and gave them permission to pick the white tree's fruit.

Later in the year, Zemouregal launched an attack on Varrock, swiftly overrunning the palace. Her ghost was one of those which appeared to an adventurer in a vision at The Sacred Forge in Camdozaal. She was later seen being guarded by five guardsmen, who formed a barrier to protect her.

The following takes place during Dimension of Disaster.

In the alternate reality where Zemouregal won, she was zombified and given the enslaved Arrav as a servant, where she delighted in treating him as a gardener. When his mind was freed, he threw a watering can at her and refused to obey her, causing her to run off and cry at the skeletal remains of former husband. 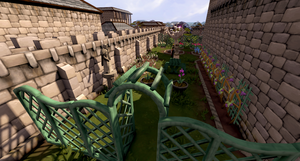 The infamous garden of Queen Ellamaria.

Transcripts Ellamaria is the author or co-author of:

Transcripts Ellamaria is mentioned in: