From the RuneScape Wiki, the wiki for all things RuneScape
Jump to navigation Jump to search
Guinea Pig? (edit) 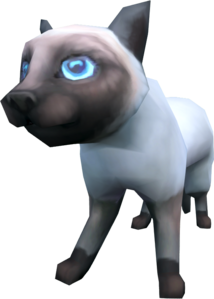 Guinea Pig is a cat that can initially be found in the northern part of Falador Park near the border wall. He believes that he is not a cat but in fact a guinea pig. Upon conversing with him using a catspeak amulet (or a cramulet that contains one), the player convinces him that he is indeed a cat. Guinea Pig then agrees to join the player at Het's Oasis where he can be found roaming near the cactus patch in the south-western quadrant of the oasis.

This information has been compiled as part of the update history project. Some updates may not be included - see here for how to help out!
Retrieved from ‘https://runescape.wiki/w/Guinea_Pig?oldid=35746269’
Categories:
Hidden categories: