From the RuneScape Wiki, the wiki for all things RuneScape
Jump to navigation Jump to search
The Old School RuneScape Wiki also has an article on: osrsw:Pong
Pong? (edit)? (edit) 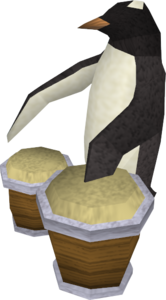 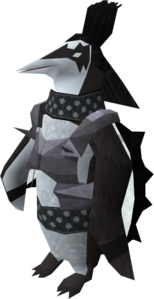 Pong is a penguin bard who appears in the Cold War, Hunt for Red Raktuber and Some Like it Cold quests. Along with his partner Ping, he is one half of the Ping & Pong duo, and inhabits a room full of instruments in the KGP Iceberg, although he is unable to play most of them due to his lack of thumbs. Unlike most other agents of the KGP, Pong is not evil and only enjoys playing music and composing songs. Like his partner, he speaks like a stereotypical hippie. During Some Like it Cold, players dress him up in a rock costume resembling Gene Simmons of KISS.

Ping and Pong have a small cameo in Back to the Freezer.

Ping and Pong are also located in New Varrock where they perform in the Blue Moon Inn. 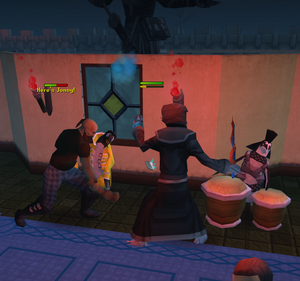 Ping and Pong in the Blue Moon Inn

This information has been compiled as part of the update history project. Some updates may not be included - see here for how to help out!
Retrieved from ‘https://runescape.wiki/w/Pong?oldid=35729971’
Categories:
Hidden categories: