From the RuneScape Wiki, the wiki for all things RuneScape
Jump to: navigation, search
The Old School RuneScape Wiki also has an article on: osrsw:Mac
This article is about the NPC in Varrock. For other uses, see Max (disambiguation).
Max, Master of AllMaxMaxMax, Jack of Trades? (edit)? (edit) 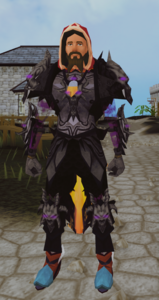 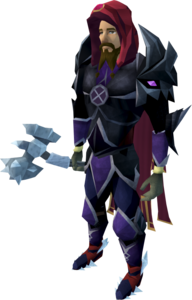 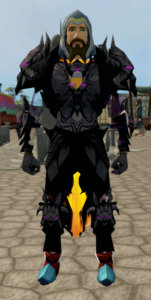 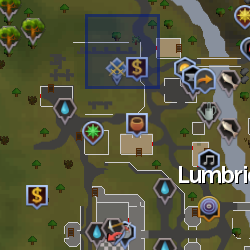 Max is a player spoof who sells the Max cape. He runs around eastern Varrock performing different skills. He wears a max cape and hood, malevolent cuirass (shadow), malevolent greaves (shadow), razorback gauntlets, emberkeen boots and a hydrix amulet (although the original news post said he was updated with an amulet of souls, this was incorrect). His combat level is 138, the highest possible for any player.

Max does multiple things which include casting High Level Alchemy, smithing at Horvik's Armour Shop, firemaking and cooking just outside Horvik's shop, spinning clay at the potter's wheels east of Aubury, woodcutting at the Varrock tree patch. He then runs to the Varrock east bank where he either fletches or casts some spells and uses a pestle and mortar. He runs around each of these locations because he is an avid skiller, but when you do manage to catch up to him he will happily sell you a max cape for 2,772,000 coins (99,000 x 28 skills) if you have level 99 in every skill. If a player talks about his cape but do not reach the requirements for it, the 99s still needed will be listed in the chatbox.

Just like a player, he has a follow option and a trade option. However, he does not have the "Req assist" option and instead of the player examine option, he has a NPC examine text. When you trade with Max, although he will accept your request to trade, he will not offer any items nor accept any items and will eventually decline the trade.

Max has a counterpart in Prifddinas, Elen Anterth, a member of the Cadarn Clan, at the Max Guild in the Cadarn district of Prifddinas. Like Max, Elen also sells max capes, both within and outside of the Max Guild. When asked if she knows him, Elen expresses a dislike for Max, finding him quite unfriendly for not stopping to chat with her when she attempts to talk with him, too obsessed with skilling, and not taking enough time to stop and relax as well as to properly enjoy what her city has to offer. Because of his actions and attitude toward the Max Guild, which he considers as a place that offers no gains and that would be a waste, Elen has informed him that he is not welcome in the Max Guild.

With the release of the Divination skill on 20 August 2013, Max lost his cape and could be found training divination at the wisp colonies around the world, now wearing a TokHaar-Kal-Ket, a pair of Drygore longswords and a Veteran hood (10 year). His examine was also changed to "He's out to master Divination now!". Max levelled up as he trained the skill[1], moving to different spots as he did so. Each world's Max was independent of the others', and thus he could not be found in the same spot on every world. At 10:12 UTC on 30 August 2013, Max achieved level 99, and the message "

News: Max has achieved at least level 99 in all skills!" appeared in the chatbox.

With the release of the Invention skill on 25 January 2016, Max again lost his cape. New dialogue was added in which, when asked about why he wasn't wearing his cape, he mentions that he needed to max Invention before he can wear it again. Max could also be seen disassembling items before gaining his cape back on 16 May 2016.

Upon the release of the Archaeology skill, he once again lost his max cape and Jack of All Trades title, changing to Jack of Trades. He regained his cape on 25 January 2021, and his title was upgraded to Master of All.

During the Dimension of Disaster, he can be found in the East New Varrock Bank. In this dimension, Max is apparently not maxed out of his skills, and is level 3 rather than 138. He is wearing the default outfit and wears to what appears to be the Max hood, however, the gem is uncharged. He doesn't wear his cape due to him being at default stats. Players cannot trade or follow him in this dimension, and he never moves. He will only say "Gaiiiiiins..."

In Gower Quest, Max appears in the Beta Portal Room in Behind the Scenes, testing out the three new skills in development: Riding, Sailing and Bankstanding. Once the player has gained level 99 in all 3 skills, he hands over the Life altar fragment 3.