From the RuneScape Wiki, the wiki for all things RuneScape
Jump to navigation Jump to search
The Old School RuneScape Wiki also has an article on: osrsw:Kitten (Gertrude's Cat)
This article is about the NPC that appears during the quest. For the pet players can receive afterwards, see Cat.
Kittens? (edit) 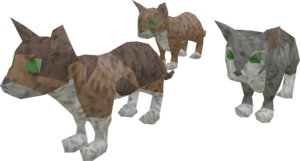 Kittens are the offspring of Fluffs (and likely Bob[1]) that appear during the Gertrude's Cat quest. They were separated from their mother within the Lumber Yard, and must be retrieved from a jiggling crate to obtain them as an item, which must then be taken to Fluffs. If the item is instead dropped, the kittens will appear on the ground and run back to a crate.

After they are returned to Fluffs, they are briefly seen playing before they follow her back to Gertrude's house. Players can then receive their own kitten as a pet from Gertrude, although not necessarily one of these particular trio of kittens.

If players speak to Fluffs after Icthlarin's Little Helper with a catspeak amulet, she will thank them for finding her kittens, and admits she has a difficult time keeping track of them all.[2] 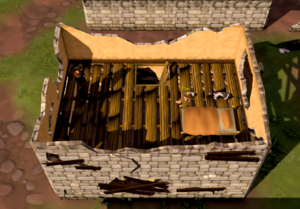 Fluffs and the kittens.