From the RuneScape Wiki, the wiki for all things RuneScape
Jump to navigation Jump to search
'Fraidy cat? (edit) 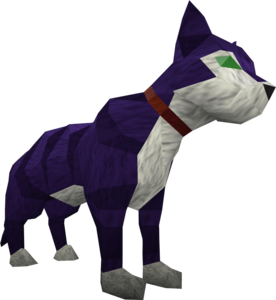 'Fraidy cat is a purple cat that may be found in New Varrock to the East of Gertrude's House. He requests the player to retrieve the Necrofelinomicon from the Zamorakian church. He is one of four cats, along with Catbot 9000, Baron Mauser and Grumps that the player needs to shoo away for the Cat's Bane achievement.

After the completion of the achievement Cat's Bane he can be found at the graveyard on the west New Varrock bank trying to resurrect Fluffs by using the Necrofelinomicon to pray to Amascut. He is successful, and he and the others cats return to Gertrude's house.

Despite being called an "ex-cat", he is apparently still alive. The phrase could simply mean that he is no longer a witch's cat since she is now dead.

This information has been compiled as part of the update history project. Some updates may not be included - see here for how to help out!
Retrieved from ‘https://runescape.wiki/w/%27Fraidy_cat?oldid=35888227’
Categories:
Hidden categories: