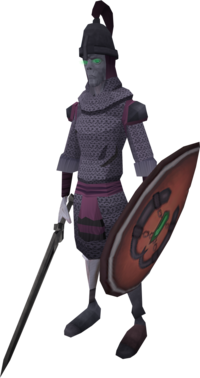 New Varrock guard captains are found in New Varrock. They are always found in groups alongside New Varrock guards. If a guard or captain is attacked, they will yell a quote and all nearby guards and the captain will attack the player. It is highly recommended to use Ranged or Magic attacks and safe spot them as their melee attacks can hit high and they use abilities to increase their damage output. They are killed for resources like coal, steel studs or spider silk to create equipment, as the best equipment players can make from store-bought items are up to tier 10. The New Varrock guards can also be summoned during the fight against Zemouregal.

When killed, New Varrock guard captains drop at least one of the items below, and may occasionally drop multiple.