The Postcat is a cat that plays a part of Cats of Menaphos. Finding The Postcat is needed to complete the Feline Good achievement. It can be found in the main desert running to and from the Menaphos main gates. The Postcat follows an anti-clockwise path starting north-west of the Menaphos gates heading to Pollnivneach, Shantay Pass, the Mining Camp, the Bandit Camp, north-west corner of the pyramid, and back to Menaphos. It takes about 8–9 minutes to complete one loop. The player can either wait at any place along the route or search going in a clock-wise direction to find it faster.

The Postcat gives additional dialogue if the player is wearing a catspeak amulet or a cramulet. The Postcat apparently has a pet human named Jess and tells the player to tell Jess to meet the cat in Pollnivneach. There is no option to tell Jess this.

Before being found and petted
He delivers the post all across the desert, even as far as Al Kharid.

After being found and petted
Neither sun, nor glare, nor heat of day stays this courier from the swift completion of his appointed rounds. 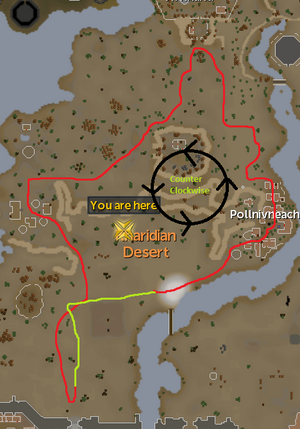 The Postcat's route through the desert.