The zombie monkey greegree allows players to turn into a Monkey Zombie on Ape Atoll and in the Ardougne Zoo. While in this form, the player may walk safely across the bed of hot rocks underneath the temple on the island. To make a Zombie greegree the player must take the bones from a large level 75 or 77 zombie monkey and a Monkey Talisman to Zooknock. 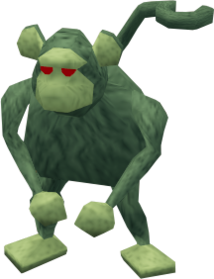