Recipe for Disaster is the 100th quest released by Jagex and is a sequel to the first quest, Cook's Assistant. It is composed of ten subquests, ranging in difficulty from easy to very hard. It is intended to be a quest which nearly any member can start, but which only the most accomplished and willing players can complete.

Dimension of Disaster, the 200th quest and a "sequel" to Recipe for Disaster, was released on 23 March 2015.

The cook is preparing for a party in Lumbridge. He tells you that a hundred years ago, a very important meeting was held in Lumbridge. His ancestor, Franizzard Van Lumbcook, cooked such an amazing banquet for the occasion that he was offered a job as head cook, along with all his descendants, for life. This big, important meeting is held in Lumbridge every 10 years and today is the 10th anniversary. As he cannot think of a brilliant dish himself, he intends to use his ancestor's recipe for the feast. However, he needs your help gathering the ingredients, again.

To complete all chapters of the quest, the players must fulfil the following quest and skill requirements.

Note: Buying a fruit blast from the Grand Exchange (not the premade version from Blurberry) works. Greenman's ale from house will instantly disappear as you leave your house. The fruit blast can also be made with the following items:

The Secret Council
The music that plays during the cutscene.

After completing Another Cook's Quest, you receive an invitation to the feast. Enter the doors to the dining room to observe the feast, and you will see members of the Secret Council of Gielinor seated at the table.

As the Duke introduces the rest of the secret council, he is interrupted by the Mysterious Old Man and is teleported to take care of it. Osman will then get taken away by Evil Bob. At this point, you enter the room. A short while later, the Culinaromancer crashes the party and starts to attack everyone at the dining table with magic spells.

Luckily, Aris, the fortuneteller from Varrock, enters the room and casts Tempus Cessit, which freezes everyone in time, except for you and her. She explains that the Culinaromancer was a cook in Lumbridge a hundred years ago and had threatened the secret council with death, only to be thwarted by the Duke's assistant, who managed to trap him in another dimension. This assistant was the cook's ancestor, and was made head cook for life.

The current head cook, whom you helped build the feast, apparently created a powerful food-magic, which released the Culinaromancer from his prison. Seeing him, Aris casts the aforementioned spell, so that you both can protect the council from the Culinaromancer's attacks. While she can easily seal the Culinaromancer in a heartbeat, due to the fact you caused the Culinaromancer to awaken she holds you responsible and sends you to save them as the magic is causing a temporal paradox that could destroy the known reality with the magic.

You can complete these subquests in any order and start as many of them at a time as you want. Each subquest opens up increased access to the Culinaromancer's Chest, which holds a variety of goods.

It is strongly recommended that you grow a pet kitten before you start the subquests if you do not already have an adult cat, as it will take two and a half hours for the kitten to grow. If you do this at the start, it should be fully grown and you can save the Evil Dave subquest for last. 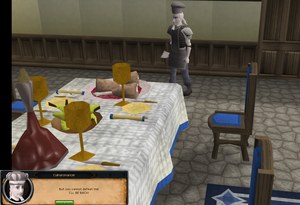 After you have freed all the council members, you will see a cutscene, where Aris restarts time by saying "Tempus procedit!" The Culinaromancer will then retreat through the portal. Aris then says that you too must go through the portal to finish him off. 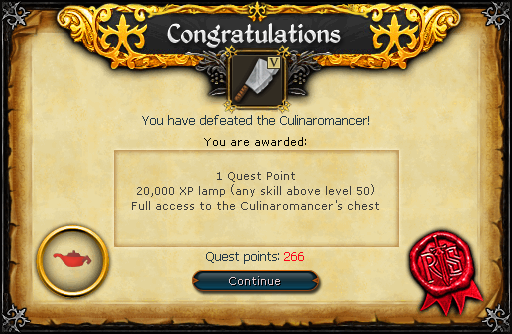 If you have fully completed all 10 subquests for "Recipe for Disaster", you will have received the following:

Recipe for Disaster is not currently required for any quests or miniquests. One of the Master Clue Scrolls require culinaromancer gloves 10 to complete it; the gloves are only obtainable from the Culinaromancer's Chest after completing this quest.