From the RuneScape Wiki, the wiki for all things RuneScape
Jump to navigation Jump to search
The Old School RuneScape Wiki also has an article on: osrsw:Fossegrimen

The Fossegrimen is a Fremennik spirit who can enchant a lyre; when played, the lyre will teleport the player to Rellekka. She can be summoned by using the offering of your choice on the strange altar to the south west of Rellekka.

Only players who have started or completed the quest The Fremennik Trials may use this teleport. The Fossegrimen requires a raw shark as a tribute before she will enchant a lyre, or a raw bass when wearing the Ring of Charos (a) (you must have enchanted the lyre once before being able to use bass). Offering a raw shark will give the lyre 20 charges. A raw manta ray can also be offered to give the lyre 30 charges, and a raw sea turtle to give the lyre 40 charges. As a part of the Fremennik Trials, players must obtain an enchanted lyre from the Fossegrimen. 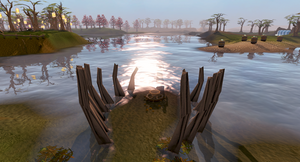 As the ring of Charos works on the Fossegrimen, she seems to be a simpler being than she appears. According to Hamal the Chieftain, she might be of a similar nature to his daughter, Asleif, who had a piece of her spirit tied to nature upon death.[1]

After completing the easy Fremennik achievements and giving the gift for her, you will get 20 more charges - 40 for a shark/a bass, 50 for a manta and 60 for a turtle.