From the RuneScape Wiki, the wiki for all things RuneScape
Jump to navigation Jump to search
This article is about the actual order. For the boss collection log title for the Temple of Aminishi bosses, see Acolyte of Seiryu.

The Acolytes of Seiryu are an order of monks found on Aminishi that worship the azure dragon, Seiryu. The Acolytes believe in spiritual enlightenment and purity, so they follow Seiryu because being a spirit of water, they believe that it is the "purest" of the four Wushanko guardians. They also believe that their bodies are impure and wish to cleanse themselves of this impurity.

While not a standard Slayer task, players may kill any of the monks if contracted by Ling or Sojobo to slay acolytes of Seiryu, rewarding a set amount of Slayer experience and a quantity of chimes upon turning in the contract. Acolytes do not require a Slayer level to damage, but will only be available as a contract with the given Slayer level - however Arhats do require 90 Slayer in order to complete the Spiritual Enlightenment miniquest to access the Spirit Realm.

There are four levels of acolytes:

In addition to the NPCs above, NPCs found within the Temple of Aminishi will also count for contracts.

While the order's founding is unknown, the Council of Seven oversee the daily routines of the order. Three of the seven members are known; Lady Himiko, Masuta the Ascended and Madame Shih.

At some point, the order has gone astray. Himiko had a vision where a mysterious being spoke to her, and it told her that all their lives were filled with sins which needed to be purified, and gave her a black stone to begin the process. Due to the order's beliefs, she believed the vision and told her fellow members, who also believed her. The Council of Seven would soon confront Seiryu and chain him to the black crystals, slowly corrupting him.

Masuta then bargained with The Ambassador, who sent them Crassian support. which included a particularly large Crassian, to keep outsiders and curious acolytes away. A refinery was also provided to create the black crystals that were used in corrupting Seiryu. The group was also supported by many mercenaries, such as ex-Death Lotus assassins and seasinger zealots, along with Hanto and Eastern mercenaries. In addition, several Menaphite soldiers led by a Menaphite captain offered their aid, having escaped the "corruption" in Menaphos.

The Council of Seven, and the Acolytes as a whole, became incredibly secretive, eventually becoming a cult to Xau-Tak's will, and no one saw Seiryu for ages, which prompted Bryll Thoksdottir to recruit adventurers to investigate. The order was informed of potential "pirates" and defended themselves appropriately, but failed to stop them from advancing deeper into the temple. Seiryu was found to be corrupted by an outside source, which the adventurers eventually drove away by destroying the black crystals covering his shackles. Seiryu telepathically communicated with his saviours and expressed gratitude, stating that he had also sensed another being in torment underneath the obliterated crust of Forinthry, now known today as the Wilderness. Seiryu would recover before finally breaking free of his shackles.

The remnants of the Order soon fled to Ulthven Kreath, where they set up in the temple's inner sanctums. They also managed to revive Masuta's spirit to assist them in their defence against the World Guardian and their allies, who began to besiege the temple to stop the Ambassador's ritual. Despite their efforts, all members present in the temple were slain and the ritual was stopped. 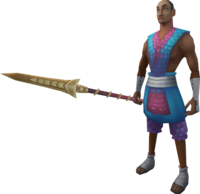 Sotapanna are Seiryu initiates that start at the bottom of the enlightenment ladder. They follow The Path of the Monk, where they can only eat and drink from natural sources, and only until they are full. They also meditate rather than being physically fit and also visit the Urn of Cleanliness. All members cannot partake in violence unless their fellow acolytes are being threatened. Sotapanna can use all three forms of combat - mizuyaris or katanas for melee, death lotus darts for ranged and master wands for magic. As they die of old age, they are given a Spirit dragon charm and proceed to the next step of spiritual enlightenment. According to Yulong, Sotapanna can converse with fellow Sotapanna. 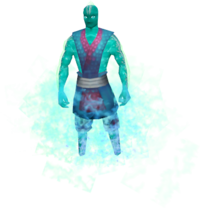 Sakadagami are Seiryu monks that removed their "impure" bodies and greed. Sakadagami believe that before they can ascend to the next step of spiritual enlightenment, they must purify their minds. During this time, they take a vow of silence and continue on with their duties and steps to spiritual achievement. They will still defend themselves or their fellow members if they are threatened, attacking with magic. After an unknown amount of time, they enter the spirit realm through the Well of Spirits where the dragon springs forth from them and they lose their consciousness.

Anagami are Seiryu monks that have purified their minds. They believe that in order to work for Seiryu, they must purify their soul before they can fully obtain spiritual enlightenment. They do not pray (believing that no one is worthier than them), idolise idols (believing that they are false) and do not believe in the unknown.

When they have done all of this, they enter the Well of Spirits again, with their accumulated dragon charms allowing them to stay in the Spirit Realm indefinitely and becoming Arhat. Arhat are allowed to return to the normal realm if they wish to.

Players can access the Spirit Realm and Arhats after the Spiritual Enlightenment miniquest.