The Pit of Trials is the location where the first boss, Beastmaster Durzag, is fought during the Liberation of Mazcab raid. 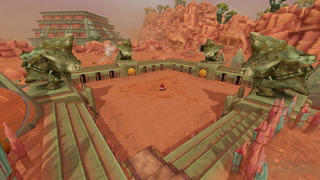 A view of the Pit of Trials 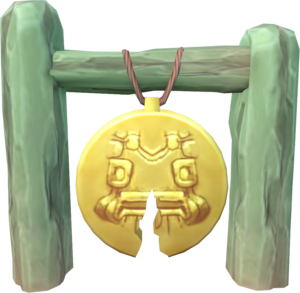 One of the four gongs in the pit

Goebie volleyball is an Easter egg minigame that can be activated after the beastmaster fight. The four gongs that hang from the walls should be restored and rung in the following order: North, North, South, South, West, East, West, East. If done correctly, the minigame will begin. The game is curated by Lefty and Righty, and the ball can be put into play by talking to one of them. Players can then keep playing by moving where the ball would land to hit it to the other side. Failing to do so will end the current game and yield a point to the opposing side. Score is kept until ten points on either side.

Goebie volleyball wasn't found by the players for a number of months after its release. It was revealed at RuneFest 2015.