Today, the gateway to a strange new world opens. Explore Mazcab's shifting forests and exotic ruins as a solo player...or take on the ultimate combat challenge of ten-player Raids!

Step over the vanquished corpse of Tuska and through the portal to Mazcab – home of the goebies:

The Liberation of Mazcab has only just begun. Read on to find out more!

No level requirements, but high combat levels and top-end gear are recommended.

The first of RuneScape's Raids – The Liberation of Mazcab – is now yours to conquer.

To start, join a group of up to 10 players in the Grouping System, and select 'The Liberation of Mazcab'. Then, head north to the magical barrier between the two goebies, and enter to get started.

You'll venture through an instanced area, using your teamwork and combat skill to make it to two bosses: the cruel Beastmaster Durzag and the mighty water elemental Yakamaru. Even reaching them will take teamwork and skill, and it'll take everything you've got to defeat them.

There are also Raid Feats – special acts of daring for the bravest and craziest raiders to aspire to. There are five per boss, and completing all of them unlocks the Daredevil title.

These are some of the most challenging encounters ever seen in RuneScape, so you're on your own from here. We're really excited to see you get to grips with them.

It's not all epic battles, though. There's a strange, alien world to explore – and a downtrodden people to help.

Traverse this bizarre, ever-changing forest, interacting with the environment to find hidden secrets. It shifts over time, so head off the beaten path to unlock hidden areas, containing XP rewards, lore, reputation and rarer rewards - such as a new pet.

Start this safe-PvP D&D at Otot or Kanatah and ferry supplies between them.

As you explore, you'll find airut to fight, tasks to complete and history to uncover. Travel wide, and become a hero to the struggling goebie people. 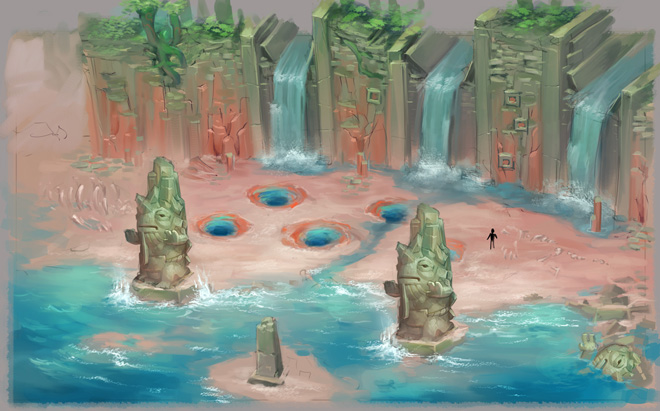 Contributing to the death of a Raid boss grants you a roll on its drop table, which includes Teci (the Raids currency), reputation with the goebies, or rare drops such as achto armour or tradeable abilities.

Note that once you loot a boss, it is locked and you cannot loot it again until two days have passed.

If you are owed rewards that you haven't picked up, you can speak to the Fetcher outside the Raids entrance. He can also tell you which bosses are currently locked for you.

Also outside the Raids entrance is a rewards vendor, who will exchange Teci for Raids armour and new abilities.

First among the rewards are spectacular new level 90 tank armour sets for all three combat styles – primeval for magic, teralith for melee, and tempest for ranged – with some awesome set effects.

Regular versions of these sets can be purchased for Teci from the Rewards Store. These degrade until destroyed, and occasionally reset cooldowns on your defensive abilities. The frequency with which this occurs will increase the more set pieces you wear.

Achto versions of the sets can be earned as rare drops from Raid bosses. These also degrade, but only until broken, and can be repaired using Teci. Achto sets have the same set bonus as the regular sets, plus another: they increase main-hand weapon damage when a shield is wielded in the off-hand. The more pieces you wear of a set, the stronger the effect.

These are available from the Rewards Shop. You can use Teci to purchase these for your own use, or to purchase a tradeable codex which teaches any of the available abilities.

Reputation can be earned in Raids, by completing solo activities around Mazcab, or by redeeming any mysterious relics you picked up from the Summer Special Cosmic Foresight effect.

Rewards follow a linear path of unlocks, and include discounts in the in-Raid supply store, travel improvements on Mazcab, a pet and titles.

This Week's Streams and Q&As

Epic content needs ample coverage, and RuneScape will be all over Twitch with Raids this week.

Look out for RuneScape firsts from the community's top boss fighters, and check out our live stream Q&A schedule below. Both streams are coming your way on Tuesday the 14th of July:

Later in the week, we're giving you two more places to quiz the developers:

The RuneScape universe just got bigger and deadlier. Have fun grappling Mazcab's most ferocious fauna, and look out for more Raids in the future! Let us know what you think over on the forums.

Commemorate the recent return of the Fremennik god V with this all-new cosmetic override set – now available on Solomon's Store.

Comprising a full armour set, cloak and sword, it's the perfect tribute to the legendary hero.

Get it now on Solomon's Store! Need more RuneCoins? You can redeem Bonds in-game, or purchase more via the website.

The Summer Beach Party is kicking it up a notch with two new events – beach ball rolling and bodybuilder posing. Have fun training your Agility and Strength with these!

There are also two new pets to pick up at the beach – the jellyfish and fish out of water – plus two more titles to discover.

Read the patch notes for further detail of today's updates.