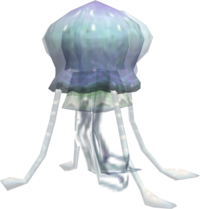 Reflecting Jellyfish are monsters found in the canal puzzle leading to Yakamaru. They can also be summoned by Yakamaru, and will cure his poison status when within melee distance of him. When a Reflecting jellyfish is nearby, all nearby Meleefish, Piercing jellyfish and Magical jellyfish will take 50% less damage from all incoming attacks, and will reflect a 25% of the damage inflicted back onto the aggressor. While a reflecting jellyfish is stunned, or being attacked by a dreadnip, it cannot reflect damage back to attacking players.

Despite having a weakness to crush, reflecting jellyfish are immune to all attacks but poison; the only way to kill these monsters is by killing the jellyfish that they are protecting or by slowly killing it with dreadnips, which is highly discouraged. Every jellyfish it protected that is killed will deal 10,000 damage to it.