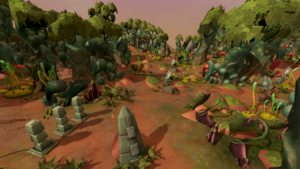 Nemi Forest is an area on Mazcab. It is randomly generated, similar to Dungeoneering floors. It will reset as soon as no players are in the previous instance.

While most of the edge of the forest comprises impassable terrain, it can be accessed by walking into the depression found near the Rangers, marked on the map with transportation icons.

You are able to find various tools to help explore additional areas of the forest. Each tool is used to remove a specific obstacle. Over time, the forest changes if no one is in the instance, and you will have to remove these obstacles again. If the obstacles are removed, they will disappear for everyone. Removing obstacles does not give experience or reputation. When leaving the forest, any tools will be removed from your inventory. Tools are also destroyed upon use. Logging out in the forest will place you outside of it.

The forest shelters an ancient goebie in a clearing accessible during the Call of the Ancestors quest, and afterward by speaking to a ranger. Hidden, until recently, from the airut the goebie directs the player to the temple where three young Goebies undergo trials to learn powerful magic.

Extremely rarely (once a week per world, or less)[1], a wild Krar Jnr will spawn in the forest, which is then broadcast to all players currently in the forest with the message of "You hear a howling in the distance..." The first player to interact with Krar Jnr will claim it as a pet in the pet interface.

Nemi Forest can be found in the North-West portion of the Mazcab overworld.

From the world window, head north, and down the hill. Then, head west at the gates of the Liberation of Mazcab raid.

Nemi Forest covers most of the western portion of the map.

Obstacles require various tools to pass. Some obstacles block off large areas, some have an object that grants experience beyond them, while many are dead ends where a few monsters may spawn. 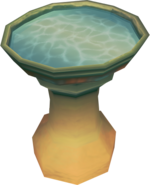 A water pool in Nemi Forest

Throughout the forest, there are random activities that grant experience as well as 5 reputation each. A total number of 45 reputation can be earned each day. They are not limited to a single person, but you are limited to doing each activity once per day; e.g., you can do multiple Prayer activities, but you can't pray at the Obelisk twice in one day. It does not stack with any bonus experience.

Skillers attempting to use the Prayer activities would be asked if they wish to gain prayer experience if they have level 1 Prayer; otherwise experience is awarded automatically. They will still gain 5 reputation even if they select no.

The experience gained from the action is based on your level, according to the following formula, where X is the experience you gain and L is the level in the relevant skill. This is equal to 4/9th (about 45%) of the experience given by the standard Jack of trades aura.

Nodes in the forest are generated according to a list. Initially, the forest picks one initial node, and the next node placed in the forest will be the node next on the list. Once the last node on the list is used, the next node will be the first node. The map is generated from the south-west in rows going east and each next row will be a bit more north than the previous row. Nodes are also placed in this order, which means that if one single row contains an Obelisk and an explorer it must have a pool in between.