From the RuneScape Wiki, the wiki for all things RuneScape
Jump to navigation Jump to search
This article is about the race of creatures living on Mazcab. For other uses, see Goebie (disambiguation). 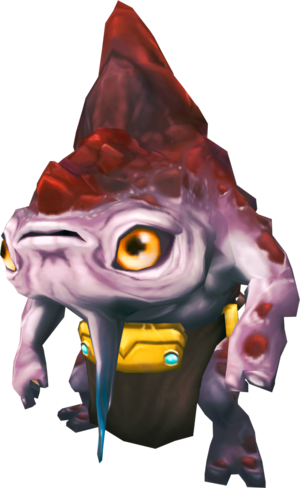 The Goebies are a race of amphibious looking creatures with large rocks on their backs found on the planet of Mazcab (also known as Chantli).[1]

They do not die of old age, but instead are killed once the rock growing on their body becomes too heavy for them to carry[2] (much like giant lobsters in the real world). The rocks on their backs contain their lungs, so attempts to chip away at the rock to keep them alive longer will instead kill them.[3] However, this can be circumvented by having their body hung on a rack, so that the rocks on their backs are unable to crush them, as seen by the ancient goebie during the Call of the Ancestors quest.

Goebies are often subjugated by the Airut to harsh penalties, such as their villages being constantly raided. The goebies fight back with nemi poison, which weakens an Airut when injected onto them.

Sometime after Call of the Ancestors, a group of Goebies left Mazcab and created a new settlement just south of Nardah.

Although Jagex have stated they are a genderless species, many Goebies are identified with male and female pronouns in-game. Additionally, a Goebie mother and father may be encountered. 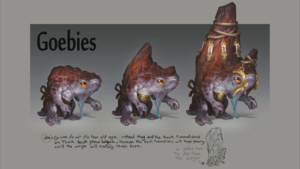